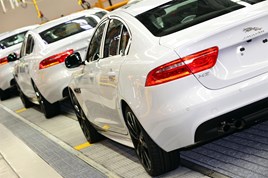 Jaguar Land Rover (JLR) plans to cut 1,000 manufacturing contractor jobs as a result of falling demand amid anti-diesel sentiment and the pressures of Brexit, it has been claimed.

Output at the company’s Solihull and Castle Bromwich plants will be cut, with staff set to be formally informed of the changes during a meeting on Monday, according to the manufacturer.

“On Monday we will be cascading our 18/19 production plans for the next fiscal year to our workforce.

“In light of the continuing headwinds impacting the car industry, we are making some adjustments to our production schedules and the level of agency staff.

ITV News and Reuters were among the media outlets that reported the total number of affected jobs would total around 1,000.

The news comes two months after the brand said it would temporarily reduce production at its Halewood plant later this year in response to weakening demand due to Brexit and tax hikes on diesel cars.

Diesel sales account for around 90% of the brand’s overall sales in the UK.

Dom Tribe, automotive sector specialist at management consultancy Vendigital, said: “This decision by Jaguar Land Rover is a further sign of ongoing uncertainty in the automotive industry. As an industry in which investment is heavily reliant on forward planning, industry bodies have been lobbying extensively for greater clarity around a Brexit trade deal.

"With JLR’s UK production facilities exporting around 75% of its vehicles and importing many parts from the EU, this action is in part an effort to help mitigate potentially-costly tariffs, which could significantly damage its bottom line.”

JLR added that it is continuing to recruit large numbers of highly skilled engineers, graduates and apprentices as it continues to invest in new products and technologies.

Jaguar sales were down 26% to the end of March while Land Rover demand dropped 20% during the same period.

Despite Jaguar’s commitment to electrified platforms, diesel still has a major role to play in future cars, says head of business Jon Wackett.

Jaguar has 'fleets firmly in its sights' with new E-Pace, first drive review

Jaguar has fleets firmly in its sights with its latest generation of products, and the new E-Pace is set to make inroads in growing SUV market