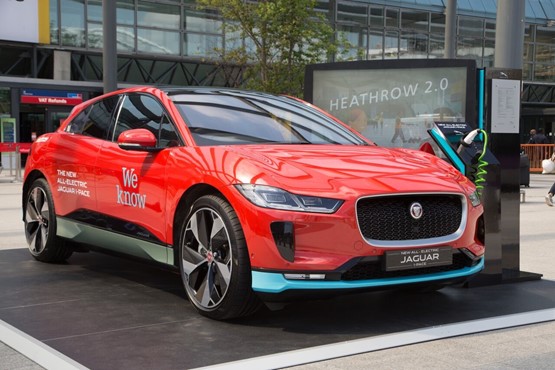 WeKnowGroup will operate up to 200 I-Paces as part of its deal with Jaguar and Heathrow.

Initially 50 cars will be used, with the option of adding a further 150 within 12 months.

Emma Gilthorpe, executive director at Heathrow, said: “We will not compromise on our commitments to the environment and our local community and we remain focussed on addressing the impact road vehicles have on air quality on the roads around the airport. These Jaguar I-Paces are the latest in a long line of initiatives we are taking to ensure that we do not force a choice between the economy and the environment – and that we can deliver benefits for both.”

Heathrow already has one of the largest corporate electric vehicle fleet in the UK, and the highest density of charging infrastructure in Europe.

Peter Buchanan, CEO, WeKnowGroup said: “This is a significant step change in our successful, decades-long relationship with Heathrow where we operate arrivals desks in all terminals, to assist thousands of travellers every year.

The fleet is expected to support up to 1,000 electric vehicle journeys per day.

A dedicated charging hub will be installed at the airport to support the new models, which have a range of almost 300 miles.

The service will create the largest chauffeur-driven fleet of electric vehicles in the UK.

Jeremy Hicks, Jaguar Land Rover managing director, said: “What we have created in the Jaguar I-PACE is utterly revolutionary; a desirable, luxurious and state-of-the-art electric vehicle that’s practical for genuine everyday use, including the tough life of an airport luxury chauffeur car."

“We have had huge interest and positivity from our customers worldwide. We’re also delighted that this endorsement extends to some of the biggest corporations on the planet.”

Newcomer’s innovations helped by being designed as electric from outset

JLR plans to cut 1,000 manufacturing contractor jobs as a result of falling demand amid anti-diesel sentiment and the pressures of Brexit, it has been claimed.