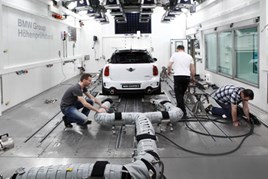 It has already began introducing the World Harmonised Light Vehicle Test Procedure (WLTP) which replaces the New European Driving Cycle (NEDC). It became mandatory on all new model launches from September 2017, and for all new cars from September 2018.

The Commission says that it has agreed to tighten RDE - Real Driving Emissions - legislation further by introducing independent control of emissions of vehicles during their lifetime.

Type approval authorities will have to check each year the emissions of vehicles already in circulation (in-service conformity testing).

In what it is describing as RDE4, it also introduces a first reduction of the conformity factor, which caters for technical and statistical variations in RDE measurements, from 1.50 to 1.43.

The Commission says it will continue reviewing the conformity factor with the aim of bringing it down to one as soon as possible and at the latest by 2023. The next reduction is scheduled for 2019.

It also proposes that from 2021 all new cars and vans must have "standardised and accessible fuel and energy consumption monitoring on board of the vehicle".

It says that the new feature, the 'on-board fuel consumption monitoring device' will allow for the first time to compare laboratory results for CO2 emissions with average real-world driving. This, says the Commission, will also provide valuable information to consumers.

The suggestion is this will be different to the car or van's fuel economy being which is currently available on a vehicle’s dashboard. It seems to suggest a standardised design, with a personalised real-world CO2 average made available through the vehicle's on-board computer.

Commissioner for the Internal Market, Industry, Entrepreneurship and SMEs, Elżbieta Bieńkowska, said: "By continuously tightening the screws on the way emissions tests are conducted, we aim to better protect our health and environment, restore consumer confidence, and add yet another incentive for a quick shift to zero emissions vehicles."

After a three-month scrutiny period in the European Parliament and Council, the Commission will adopt the proposals, which would then apply from January 1, 2019

Read more in the next edition of Fleet News.

A fleet-friendly tax regime can get car emissions back on track, says BVRLA

The UK’s largest purchaser of new cars says it wants to work with Government to revive the EV market and reverse the increase in average new car CO2 emissions.

Fears that CO2MPAS figures will increase BIK and NIC

‘Real-world’ emissions conversion tool, which changes a new WLTP value into an NEDC figure for tax purposes, increases CO2 values by 10% or between 10-15g/km on average.