Advanced road safety technology to be standard on new cars

The package, which also includes new targets to cut road deaths and serious injuries in half by 2030, will need to be approved by 28 member states and the European Parliament.

Antonio Avenoso, executive director of the European Transport Safety Council (ETSC), said: “Taken together, today’s announcements could represent the biggest step forward in road safety in Europe since the introduction of the seat belt.

“Road traffic injury is still the number one killer of young people across the continent so these essential measures cannot come soon enough.”

However, he stressed that today’s announcements alone will not make the difference. “It is absolutely crucial that EU Member States and the European Parliament give their backing to the plans and that they do not give in to pressure from car manufacturers, who are already attempting to weaken parts of the vehicle safety proposal,” he claimed.

The EU published four road safety measures today as part of its so-called third mobility package, they include an overall outline of the road safety strategy for the decade to 2030; new vehicle safety standards; updated rules on road infrastructure safety management and a strategy for automated driving.

The Commission is proposing that new models of vehicles are equipped with advanced safety features, such as AEB, lane-keeping assist system or pedestrian and cyclists' detection systems for trucks.

It says that within three years all new models introduced on the market must have 11 advanced safety features, such as AEB, lane-keeping system, over-ridable intelligent speed assistance or driver's distraction recognition. Further measures will be subsequently introduced. 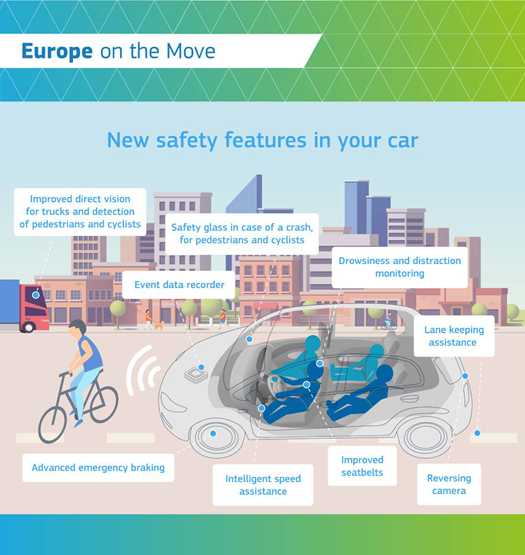 Such features offer significant potential to compensate for human errors, a major factor in most road accidents, it says.

In addition, the current gaps in the legislation, essentially exempting certain SUVs and vans from mandatory crash tests, will be lifted to make sure that there is no differentiation between certain vehicle categories.

In addition, the Commission is helping Member States to identify dangerous road sections and to better target investment. These two measures could save up to 10,500 lives and avoid close to 60,000 injuries over 2020-2030, thereby contributing to the EU's long-term goal of moving close to zero fatalities and serious injuries by 2050 - Vision Zero.
Clean Mobility

Furthermore, the European Commission has put forward the first ever CO2 emissions standards for heavy-duty vehicles. In 2025, average CO2 emissions from new trucks will have to be 15% lower than in 2019. For 2030, an indicative reduction target of at least 30% compared to 2019 is proposed.

These targets, it says, are consistent with the EU's commitments under the Paris Agreement and will allow transport companies – mostly SMEs – to make significant savings thanks to lower fuel consumption (€25,000 over five years).

To allow for further CO2 reductions, the Commission says it is making it easier to design more aerodynamic trucks and is improving labelling for tyres.

See the May 31st edition of Fleet News for more on this story.