Volvo updates emissions figures for all models with WLTP 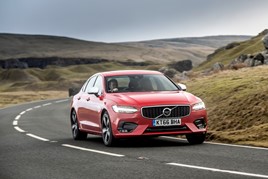 From September 1 2018, only WLTP-homologated cars can be sold in Europe.

WLTP is a laboratory test, and replaces the New European Driving Cycle (NEDC) that can trace its roots back to the 1980s. Both tests enable customers to make comparisons between different vehicles, but WLTP uses a driving cycle that is more reflective of on-road driving.

The aim of the new WLTP cycle is to ensure published fuel economy and emissions offer a more realistic reflection of real-world driving, helping customers to judge better the fuel and emission efficiency of their car.

The revised emissions figures result in an increase for average CO2 emissions across the Volvo range.

Combined with price rises (£1,250 for S90 Momentum) company car drivers opting for the new models can expect an increase in Benefit-in-kind (BiK) tax.

All the updated figures are available in our fuel economy and emissions database, or compare the BiK increase with our company car tax calculator.

The WLTP test is backed up by the new Real Driving Emissions (RDE) test – an on-road test of up to 120 minutes, which evaluates a car under a variety of driving conditions and speeds. A car can only be sold once it passes both WLTP and RDE tests.

The figures Volvo publishes for its models are achieved through the WLTP cycle, then correlated back to an NEDC equivalent for comparison purposes.

“We are pleased that we are the first to sell a complete range of cars that meets the new testing standards,” he added.

"The new WLTP fuel test regime is a lesson in how not to introduce change. It’s a total mess," according to Fleet News editor Stephen Briers

Fleet sales could spike ahead of the September introduction of new WLTP regulations, says Cap HPI.