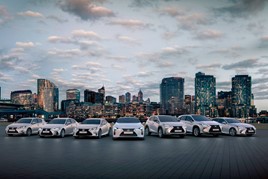 Lexus is targeting increased registrations to businesses and fleets after revamping the way its dealers interact with these groups.

The manufacturer has historically focused its fleet business through six dealers but, from January this year, it has increased its number of business centres to 30.

Ewan Shepherd, director of Lexus, said the previous arrangement meant “the whole network didn’t really try hard in reaching out to the local fleet market”, because it was centred around those six dealers.

He added: “They have now refocused their attention on untapping the opportunities on their doorstep which they didn’t before. But we have now engaged many more dealers in the network with reaching out to small businesses.

“All manufacturers have fleet bonus programmes, but we are differentiating the rewards for effectively selling to small businesses in their local market area and we want to do that for two reasons.

“One is selling locally, and the second reason is to give a level of service to fleet customers which is exceptional.

“We don’t just check a vehicle has been sold, we check the level of satisfaction in the experience of that particular customer and we reward against that.

“What we are trying to get is loyalty to the centre, but also advocacy for Lexus in the area.

“We are already seeing are realising that there is quite a lot of interest, partly because hybrid is now in the ascendancy, but also because we have got a broader range than we have had before.”

Shepherd was speaking at the European unveil of the ES executive saloon, which will replace the GS in Lexus’s current UK line-up at the end of the year.

The seventh generation ES will be the first to be introduced to the UK and markets in western Europe.

Available from next January, the UK range will feature the ES 300h, powered by a new self-charging hybrid system.

Total system power is 215PS/160kW and combined cycle fuel economy is from 60.1mpg.

He said: “ES is in a segment which is a busy one in the UK market with the three German brands in there and, of course, Jaguar.

“Our brand is quite niche. We don’t go into the market expecting or planning to offer big discounts and we have no big aspirations to sell big volume.

“I would see the people who have bought Jaguar XFs are those who we probably will get a few inquiries from, and I’m already hearing that this is, indeed, the case.”

However, this year, to the end of March it registered a total of 3,006 vehicles, a 4% increase (+118) compared to the same period last year.

Shepherd is confident this goal can be achieved, and will be aided by Lexus’s wide range of hybrid models, which will include a compact UX crossover next year.

“We see already from some of the national enquiry levels over the past 12 months that there is a natural migration to alternative fuel vehicles and petrol electric hybrids,” he said.

“Our approach in general terms with fleet is that we are never going to be the biggest fleet brand in the UK market because our whole aspiration is to sell only 20,000 cars a year by 2021 and this is a fraction of the amount of our competitors.

“We don’t go into the market expecting or planning to offer big discounts. We have taken a different approach.

“We want to have an appropriate foothold, but for SMEs, user-choosers and for people who want something a bit different.”

Lexus has announced prices and specifications for its new flagship LS 500h. The new model costs from £72,595.

Lexus has released the first official image of its new UX urban compact crossover, prior to the model making its world debut at the 2018 Geneva Motor Show on March 6.