Mercedes E-Class gets higher CO2 emissions due to WLTP 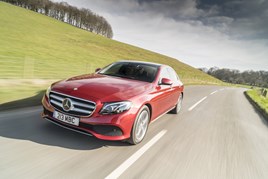 Mercedes-Benz has increased the official CO2 emissions for the E-Class as a result of new WLTP emissions testing.

The revised figures - obtained via the new testing cycle then converted back to an NEDC equivalent - have been announced alongside a larger choice of petrol and diesel engines.

Official emissions for the E-Class saloon have increased from a base-level 102g/km to 122g/km.

All new cars launched since September 2017 have been required to be tested under the new regime and the Government has set a target for all manufacturers to re-test existing models by September 2018.

The revised test is designed to represent the real-world emissions of a vehicle and therefore produces an increased figure.

Using the Fleet News Company Car Tax Calculator, you can see all the changes across the model line-up.

Mercedes-Benz has also published revised figures for the GLC SUV.

Volvo published revised figures for its entire model line-up last week and more manufacturers are expected to release figures in the coming months, prior to the September deadline.

Alongside the revised emissions figures, Mercedes-Benz has introduced a new, more powerful, diesel engine to the range.