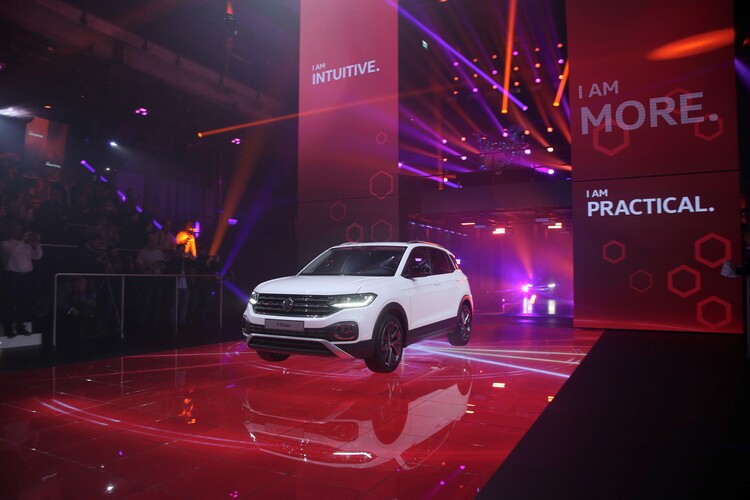 Volkswagen’s latest vehicle is another SUV, perhaps not a surprise when you consider the company believes that, by 2025, one in two vehicles the brand sells will be a high rider.

The compact T-Cross completes the brand’s SUV line-up (for now, at least), with a compact vehicle following in the footsteps of its stablemates, the Audi Q2 and the Seat Arona.

It’s a way for the brand to keep supermini drivers happy – offering a fraction more space, a higher seating position and a bodystyle that is on trend.

The car is 127mm shorter than its most recently launched T-Roc crossover sister, and the stance is quite different, too.  The T-Cross is 97mm taller than a Polo supermini, but it’s posture makes it appear taller and narrower.

Built on the MQB platform, Volkswagen head of design Klaus Bischoff said the design has a short overhang to increase visibility and manoeuvrability, tall bonnet for an imposing look, and longer 2.56m wheelbase for increased passenger room.

Full LED front headlights complete the ‘face’ of the car, wrapping round to the creases along the vehicle’s chiselled side. Large wheel arches and copious plastic mouldings increase the chunky nature of the car.

Bischoff says the styling is inspired by the largest Volkswagen SUV, the Touareg.

The LED headlights can be specified with Light Assist, for automatic control of the main beam when faced with oncoming traffic.

At the back, the bold styling continues with a wraparound light panel encompassing the whole of the car – particularly increasing contrast on the lighter and brighter colours.

Personalisation is back on the agenda, too – 12 bold and bright colours are available, along with a broad range of alloy wheels, including blue and orange trimmed specimens.

The interior is dominated by technology – a large eight-inch touchscreen fills the dashboard, along with a digital instrument panel.

Four USB ports are fitted – two in the front, two in the back, along with wireless charging option and a 300w Beats Audio optional sound system with subwoofer. Keyless entry and wireless inductive phone charging are further options.

Practicality is strong, with a rear sliding bench that can move 14cm to allow boot space or legroom for passengers as required.

Both drivers and passengers sit high up, with a 652mm rear vantage point, and 597mm height in the front, for a good view of the road ahead.

A stylish new steering wheel is fitted, with a flat bottom in the R-Line trim.

The boot is usefully sized, between 385 and 455 litres depending on seat position, which is similar to sector rivals – with a flat boot floor. Rear seats can also be split 60:40. When folded, 1281 litres of space is available – just ten litres less than the larger T-Roc when folded flat.

Personalisation continues on the inside, too – with exterior colours carried over to the dashboard for certain hues, and a range of two-tone seat fabrics.

The car will be available with Volkswagen’s 1.0-litre turbocharged TSI engine from launch, in 95ps and 115ps variants, both fitted with petrol particulate filters. Five and six-speed manuals will be available, along with a seven-speed DSG automatic.

Perhaps not surprisingly, a diesel variant is not in current plans for the UK launch – but a 1.6-litre TDI is available in mainland Europe.

The car is available in front-wheel drive only – both to keep the cost affordable, and as much of its use will be in towns and cities.

The T-Cross has a strong bank of standard safety equipment. ‘Front Assist’ packages up pedestrian monitoring, and city emergency braking.

Safety ratings have not been announced, but the brand claims the T-Cross has excellent occupant protection, so expect a high Euro NCAP rating.

When arriving in the UK market, the car will be available in S, SE, SE-L and R-Line trim levels, with pricing expected to start around £17,000.

CO2 figures are not yet available, and order books open in February 2019, with first deliveries expected in the Spring.