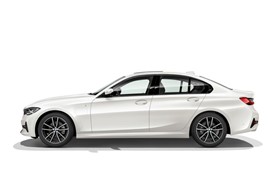 BMW’s 330e plug-in hybrid will have a zero emissions range of 37 miles and CO2 emissions of 39g/km when it goes on sale in in the UK in July next year.

Prices are yet to be confirmed, but BMW has detailed information about improvements to the zero emissions range by 50% and the 10% reduction in CO2 compared with the previous model.

The new 330e will not qualify for money from the Government's plug-in car grant as it has a zero emissions range of under 70 miles.

A new addition to the new 330e is the standard-fit XtraBoost – an on-demand performance system that increases power output of the plug-in hybrid drive from 252hp by 41hp at the touch of a button.

The plug-in hybrid drivetrain comprises a 184hp 2.0-litre four-cylinder petrol engine combined with an electric motor that generates a continuous output of 68hp and a peak output of 113hp.

Together, the two drive units develop a total output of 252hp along with a peak torque of 420Nm, but extra power can be sourced when selecting the Sport driving mode. This activates the XtraBoost system that draws on power stored in the battery.

BMW said the XtraBoost will help to deliver on the company’s brand promise of performance and driving dynamics that are expected from the 3 Series.

As a result of the XtraBoost technology, the new 330e can accelerate from zero to 62mph in six seconds and can go on to a top speed of 143mph. It can travel up to 68mph when running on electric power alone – 18mph faster than the previous model.

The 330e will be available in SE, Sport Line and M Sport trims and  BMW has said “virtually the entire range of optional equipment features for the new BMW 3 Series saloon is available for the plug-in hybrid”.

The 330e will come with a new service that links in with the car’s satellite navigation system to locate public charging stations, along with a forecast of the occupancy status of the charge point at the time of arrival.

The plug-in car grant for ultra-low emission cars will be cut by £1,000 and no longer apply to hybrid cars with a range of less than 70 miles, from November 9.

Grant-eligible vehicles were sold at a rate more than six times higher than normal, causing officials to put the new scheme in place on Sunday (October 21)

PHEVs’ exclusion from the Plug-In Car Grant was inevitable