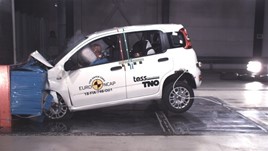 The Fiat Panda has become one of only two zero-rated cars in Euro NCAP’s history – the other was the FIAT Punto (2017).

It also was awarded lowest ever Child Occupant Protection score (16%)

The 2018 facelift Fiat Panda failed to achieve more than 50% in any of the car safety organisation’s four key testing categories.

The safety of children seated in the rear was of specific concern to experts, with its Child Occupant Protection score of 16% falling significantly short of the 79% average.

Matthew Avery, director of research at Thatcham Research, said: “Most troubling is that the FIAT Panda is seen as a good choice for young drivers and fledgling families. But the only safety technology fitted were seatbelt reminders and the rear system failed to meet requirements, so wasn’t even rated.”

He continued: “Carmakers across all categories have responded positively to the more exacting tests brought in by Euro NCAP this year, especially those that assess crash avoidance technology.

“As the bare minimum, a standard-fit Autonomous Emergency Braking system should be available with the Fiat Panda. This is especially important since the car offers so little protection in the event of a collision.

“These shocking Euro NCAP test results demonstrate an inconsistent commitment to safety, as Fiat has produced four and five-star cars in the past.”

Another poor performer in this month’s round of Euro NCAP testing was the new Jeep Wrangler, which achieved just a one-star rating and a 50% Adult Occupant Protection score. It joins the Fiat Punto and Fiat Panda as the three lowest rated vehicles to go through the programme.

Avery explained: “Unlike the Fiat Panda, the Jeep Wrangler is an entirely new vehicle and doesn’t come cheap. Buyers outlaying over £50,000 on a car should expect more than a one-star safety rating.

“No AEB system is fitted, which is unheard of in this price bracket.

“There were a number of issues with the Wrangler in impact testing too, in terms of deformation of the footwell and damage to connecting structures, while the make-up of the dashboard was seen to present a risk to occupants.”

Despite the headline-grabbing zero-star rating for the Fiat Panda and one-star rated Jeep Wrangler, six cars with excellent safety credentials have been launched in December.

Avery continued: “These six carmakers take a more consistent approach to safety across their model range, and all have made a conscious decision to meet the standards set by Euro NCAP’s toughest tests.

“The Audi Q3, Jaguar I Pace, Peugeot 508 and Volvo V60 are all amongst the ten safest cars produced in 2018, with the BMW X5 and Hyundai Santa Fe not far behind.”

Suzuki's Jimny scored three stars out of a maximum five in Euro NCAP’s latest round of testing for a “weak” safety performance.

Euro NCAP has awarded the 2018 Mazda6 a five star rating – the first vehicle by the manufacturer to receive the maximum score in the new, more stringent safety test.

Hyundai has achieved a five-star safety rating for the new hydrogen-powered Nexo, in the latest round of Euro NCAP tests.