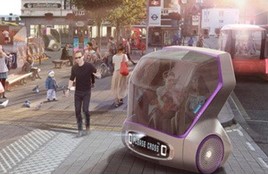 The Government has announced that a process is being developed to support the advanced trials of automated vehicles.

In response to feedback from industry, the Government has also announced that its code of practice for testing automated vehicles will be strengthened further to set even clearer expectations for safe and responsible trials.

Furthermore, the Government says that advanced trials will not be supported unless they have passed rigorous safety assessments.

With the UK’s market for connected and automated vehicles estimated to be worth £52 billion by 2035, it says the announment is a major boost to a sector open to investment from transport technology companies.

It also demonstrates that the Government is on track to meet its commitment to have fully self-driving vehicles on UK roads by 2021, as part of the government’s modern Industrial Strategy, it said.

Jesse Norman, future of mobility minister, said: “Thanks to the UK’s world class research base, this country is in the vanguard of the development of new transport technologies, including automation.

“The Government is supporting the safe, transparent trialling of this pioneering technology, which could transform the way we travel.”

Richard Harrington, automotive minister, added: “The UK has a rich heritage in automotive development and manufacturing, with automated and electric vehicles set to transform the way we all live our lives.

“We want to ensure through the Industrial Strategy Future of Mobility Grand Challenge that we build on this success and strength to ensure we are home to development and manufacture of the next generation of vehicles.

“We need to ensure we take the public with us as we move towards having self-driving cars on our roads by 2021. The update to the code of practice will provide clearer guidance to those looking to carry out trials on public roads.”

The ‘code of practice’, first published in 2015, makes clear that automated vehicle trials are possible on any UK road provided they are compliant with UK law - including testing with a remote driver.

The update to the code acknowledges the growing desire of industry to conduct more advanced trials, and a process to handle such trials on public roads is now being developed, it said.

Under the strengthened code, those carrying out trials for automated vehicles will be expected to publish safety information, trial performance reports and to carry out risks assessments before conducting a trial.

Trialling organisations are also expected to inform the relevant authorities, emergency services, and anyone who might be affected by trial activity.

Paul Newman, founder of autonomous vehicle software company Oxbotica, said: “Self-driving vehicles are already a reality on UK roads. We are currently testing our cars in London, Oxford and other cities across the UK and Europe.

"With its complex and diverse roads, the UK is the perfect testing ground for this technology. We have had huge success in bringing autonomy to these roads and will continue using the UK as our main location for trials.

"The Government’s updated framework allows us to continue to progress trials and bring forward the opportunity this new technology affords us.”

Chris Patton, from the EMEIA Transport team at Fujitsu, added: “It’s encouraging to see the Government demonstrating such ambition with regards to the future of transport.

"Autonomous cars have the potential to massively reduce congestion and their environmental impact, while making transport cheaper and safer. However, while there is excitement about what driverless cars will mean for the future of mobility, there is still understandably a degree of nervousness – we’re in the very early stages of the journey to driverless, not just because the technology isn't yet fully ready but also because the public may not be.

Fujitsu research found that less than third of people would be happy to be picked up by a driverless car, and that number drops to 17% when it comes to trusting autonomous vehicles to drive the children safely to school.

"These fears are to be expected; ceding control of your own or your family’s safety to a technology you don’t fully understand can be a scary prospect and, for the time being, the technology feels untested," Patton continued.

“While it’s important to embrace the potential of this technology, there are also other areas where the sector can innovate to create a more efficient, sustainable, and convenient transport infrastructure.

"For example, while the public might not be ready for full-throttled driverless cars, they are more likely to be receptive to innovations which move us towards an on-demand transport system.

"Both business and Government should be educating the public on the benefits of this approach and working together to put in place the infrastructure to make it possible.”

A last-mile delivery concept using self-driving, electric pods called Ez-Pro has been unveiled by Renault at the Hannover Motor Show in Germany.

New guidance has been published by the British Standards Institute (BSI) to help protect self-driving cars from being hacked.

JLR has developed technology that beams a series of projections onto the road to show the future intentions of the self-driving vehicle.