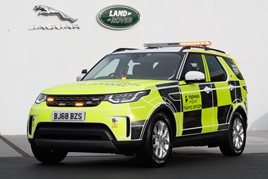 Seventy Discovery models have been specially modified for the needs of traffic officers, including a roof-mounted light array, programmable rear LED board, iconic Battenburg livery and a reinforced load areas.

The Land Rover Discovery SE 3.0 Sd6 models will be in service with Highways England for around four years, with each expected to cover around 250,000 miles on England’s motorways and major highways.

Traffic officers have to carry more than 600kg of equipment, including lights, traffic cones and safety barriers, as well as tow stranded vehicles.

Scott Dicken, Jaguar Land Rover sales director, said: “Highways England works tirelessly to keep England’s motorists moving and we are proud that this fleet of Land Rover Discovery’s has been chosen to keep the team mobile and equipped with everything they need to take on the toughest challenges whatever the location, whatever the conditions.”

The new diesel engines in Jaguar and Land Rover cars are some of the cleanest models for NOx emissions on sale in Europe, the AIR Index has found.

Jaguar Land Rover (JLR) is recalling 44,000 cars in the UK after regulators found 10 models were emitting more CO2 than they had been certified to emit.

Jaguar Land Rover (JLR) has installed 166 smart chargers for electric vehicles at its Gaydon engineering centre, to encourage its staff into greener cars.