Volvo models across Europe to warn each other about road hazards 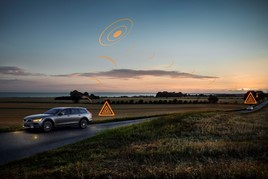 Volvo cars across Europe will be able to warn each other about slippery roads and hazards with new connected technology.

Hazard Light Alert and Slippery Road Alert were first introduced in 2016 on Volvo’s S90 and V90 cars in Sweden and Norway.

This cloud-based system will now be fitted to all new model year 2020 Volvos and can be retrofitted on all models based on the company’s SPA or CMA platforms from model year 2016 onwards.

“Volvo owners directly contribute to making roads safer for other drivers that enable the feature, while they also benefit from early warnings to potentially dangerous conditions ahead.

“The more vehicles we have sharing safety data in real time, the safer our roads become. We hope to establish more collaborations with partners who share our commitment to safety.”

Under Hazard Light Alert, as soon as any equipped Volvo switches on its hazard lights, the system sends a signal to all nearby Volvo cars connected to the cloud service, warning drivers to help avoid potential accidents.

This is particularly useful on blind corners and over the crest of hills in the road.

Meanwhile, Slippery Road Alert increases the driver's awareness of both current road conditions and those on the road ahead by anonymously collecting road surface information from cars faurther ahead on the road and warning drivers approaching a slippery road section in advance.

Starting in the early 2020s, the company will also install in-car cameras and other sensors that monitor the driver and allow the car to intervene if a clearly intoxicated or distracted driver is risking an accident involving serious injury or death.