Fiat merger with Renault proposed to save technology costs 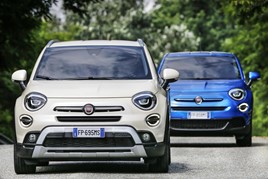 Fiat Chrysler Automobiles (FCA) has proposed a merger with Renault, which would save €5 billion (£4.4bn) a year by sharing development costs on technology such as electric vehicles and self-driving cars.

The combined business would be 50% owned by Fiat shareholders and 50% by Renault. Combined vehicle sales would be 8.7 million units.

Renault’s Board of Directors met yesterday (Monday, May 27) to examine the proposal.

After reviewing the terms, the Board agreed to study the offer, which it said would create additional value for the Alliance.

It said: “A further communication will be issued in due course to inform the market of the results of these discussions, in accordance with applicable laws and regulations.”

Shares in both companies rose strongly following the announcement.

Carmakers have faced pressure to consolidate amid major industry shifts, including towards electric vehicles.

In a statement, FCA said that the planned merger would create a "world leader in the rapidly changing automotive industry with a strong position in transforming technologies, including electrification and autonomous driving".

No plant closures would be caused as a result of the tie-up, it said.

If the plan goes ahead, Nissan and the French government will own about 7.5% apiece of the new, merged company.

Renault already has an alliance with Japan's Nissan, in which research costs and parts are shared. The companies own shares in each other, too. Renault owns 43.4% of Nissan's shares and Nissan owns 15% of Renault.

Renault has unveiled the new Clio, ahead of its arrival in the UK in the Autumn.