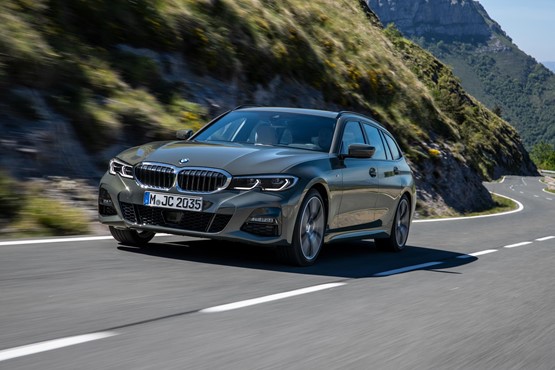 Following the launch of the new 3 Series saloon, the estate version features the same performance, handling and efficiency updates.

The new model is larger than its predecessor and will be offered as a plug-in hybrid for the first time.

Its boot can hold 500 litres – five litres more than its predecessor – when all the seats are occupied, and directly usable primary load capacity is up by 32 litres. Boot capacity expands to offer a maximum capacity of 1,500 litres.

Modifications to the car’s body to divert wind noise to good effect give a further boost to acoustic comfort, while the structural foam used to fill the A-pillars lessens the amount of airborne sound that reaches the interior. Acoustic glass for the windscreen and front side windows is also part of the standard specification.

A range of petrol and diesel engines are offered. The 320d and 318d models are mated to the latest-generation six-speed manual gearbox as standard, with an eight-speed automatic transmission available as an option.

All-wheel-drive system is standard on the range-topping BMW M340i xDrive Touring and available as an option on the 330d xDrive and 320d xDrive models.

The 330e will be available from next year. It is expected to have CO2 emissions from 42g/km and has a total output of 292PS.

Pricing will be confirmed shortly.

Much anticipated seventh generation of best-selling BMW 3 Series is a very impressive package, and one which will not disappoint any company car driver.

BMW has unveiled its new 1-Series, which will go on sale from September priced from £24,430.