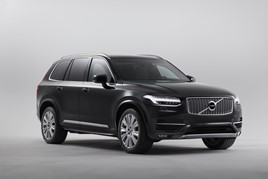 It’s unlikely to be on the list of most fleet managers, but those needing to offer their drivers more protection than just airbags and crumple zones, now have the option of the Volvo XC90 Armoured.

Weighing in at 4.5 tonnes and offering occupants ‘360-degree ballistic resistance as well as explosive resistance’, the XC90 Armoured features high-strength, 10mm-thick armour, and glass ‘that can be up to 50mm’ thick. Built on the Inscription version of the Volvo XC90 T6 AWD, these modifications add around 1,400kg to the weight of the car, which gains uprated suspension and new brakes to cope with the additional mass.

The manufacturer says its new offering is built in response to a growing global demand for armoured vehicles and that Volvo Cars has received ‘numerous requests over the past few years to develop an armoured XC90’.

Stephan Green, marketing director at Volvo Cars Special Vehicles, said: “The XC90 Armoured (heavy)… enables us to offer a car that provides a high level of protection while retaining the car’s fundamental properties. Potential customers include security services who would use the car to transport high-profile individuals.”

Manufactured at the Torslanda plant in Sweden, production is classified, with ‘stringent procedures and oversight in place’ in order to provide the specific ballistic requirements.

For those who are in the market, the Volvo XC90 Armoured (heavy) is available to order now and the first customer deliveries will be made at the end of 2019, priced at £450,000.

Considering a Volvo for your fleet or next car? Read our Volvo company car reviews here.

BMW has expanded its range of security vehicles to include the new X5, offering protection from firearms attack, robbery, kidnap and car-jacking.

Two blue-light-converted Volvo XC90s have been chosen to provide the ground response for Essex and Herts Air Ambulance Service.