Jaguar Land Rover to build electrified cars in the UK 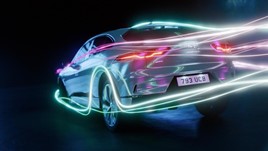 The first new electric car to be produced at the plant will be the XJ. Designed, engineered and built in the UK, it has been exported to more than 120 countries.

The new all-electric XJ will be created by the team behind its premium electric SUV, the Jaguar I-PACE, which is built in Graz, Austria.

Production of the existing Jaguar XJ will end in July.

Jaguar’s Castle Bromwich plant will undergo extensive work in order to transform it into the UK’s first premium electrified vehicle plant; a transformation which the manufacturer says is ‘the most significant in the plant’s history’.

Jaguar Land Rover will continue to produce diesel and petrol vehicles alongside its full electric and hybrid models. To enable this parallel production, the manufacturer is investing in new facilities and technologies to support its next-generation Modular Longitudinal Architecture (MLA).

Despite its investment in EV production and expansion of its electrified vehicle line up, Jaguar Land Rover acknowledges that ‘increased consumer take-up remains a challenge’.

Prof. Dr. Ralf Speth, chief executive officer of Jaguar Land Rover, said: “Convenience and affordability are the two key enablers to drive the uptake of electric vehicles to the levels that we all need. Charging should be as easy as re-fuelling a conventional vehicle.

“Affordability will only be achieved if we make batteries here in the UK, close to vehicle production, to avoid the cost and safety risk of importing from abroad. The UK has the raw materials, scientific research in our universities and an existing supplier base to put the UK at the leading edge of mobility and job creation.”

Jaguar Land Rover is calling on government and industry to work together to bring giga-scale battery production to the country.

The 193,750 sq ft research and development facility will enable the development of the next generation of battery systems and provide opportunities for partnership between industry and academia, delivering on the Government’s Industrial Strategy.

According to a report by Close Brothers Motor Finance, two in five drivers are considering an EV as their next vehicle – an increase of 7.5m drivers in the past two years. It also suggests that about cost, range and charging time are lessening.

The I-Pace is a welcome addition to the premium EV sector. It’s capable and impressive in many areas. Its timing should give it a head start over its premium rivals.