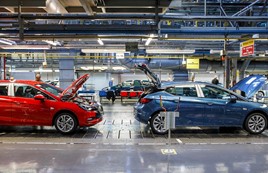 Vauxhall's Ellesmere Port plant could be closed if the UK's exit from the EU makes it unprofitable, warned Groupe PSA boss Carlos Tavares.

He told the Financial Times that the company, which owns Vauxhall, "has another plant in mind" if the conditions of Brexit are "unfavourable".

Currently, the Ellesmere Port plant makes the Astra and employs more than 1,000 people.

"Frankly I would prefer to put it in Ellesmere Port but if the conditions are bad and I cannot make it profitable then I have to protect the rest of the company and I will not do it,” Tavares said.

In June, Vauxhall announced that the next generation Astra – due in 2022 – would be built in Russelheim, Germany and one other plant.

It said, at the time: “the decision on the allocation to the Ellesmere Port plant will be conditional on the final terms of the UK’s exit from the European Union and the acceptance of the New Vehicle Agreement, which has been negotiated with the Unite Trade Union.”

The current Astra is built in Ellesmere Port and Gliwice in Poland. The model is currently halfway through its lifecycle having launched in 2015. A facelifted version will be on sale before the end of the year.

“Industry still does not know what the UK’s relationship with the EU will be in the coming weeks and months,” he said.

“Uncertainty has already caused serious damage – car plants are on enforced shutdown, investment has been cut and jobs lost. This cannot go on.”

Honda announced it will close its Swindon vehicle manufacturing plant at the end of the current Civic’s production lifecycle, in 2021.

It followed news that Nissan had abandoned its plans to build the new X-Trail SUV in the UK, blaming falling sales of diesel models as the cause.

A ‘no deal’ Brexit may have been avoided for now, but uncertainty over the UK’s future relationship with the EU is taking its toll on the car industry.

Trade body SMMT warns the next Prime Minister ‘no deal’ Brexit could cost the UK auto industry up to £70m a day in tariffs and delays to parts at the border.

The next Vauxhall Astra may not be built in the UK if the final terms of the UK’s Brexit deal are not favourable.