Nissan cancels plans to build X-Trail in the UK 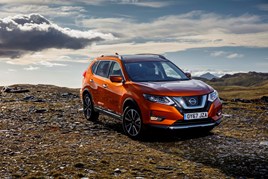 Nissan has abandoned its plans to build the new X-Trail SUV in the UK, blaming falling sales of diesel models as the cause.

The car maker has previously made assurances that production of the the new model would take place at its Sunderland plant, where the Qashqai and Leaf are built.

Gianluca de Ficchy, Nissan Europe chairman, said: “While we have taken this decision for business reasons, the continued uncertainty around the UK's future relationship with the EU is not helping companies like ours to plan for the future."

A number of car makers in the UK, including Jaguar Land Rover, Toyota and Vauxhall, have expressed concerns over potential disruptions as a result of Brexit.

The Society of Motor Manufacturers and Traders (SMMT) says British car production fell to its lowest level for five years in 2018. 1,519,440 new cars left UK factories, a decline of -9.1%, and the second consecutive annual fall as the sector faces multiple challenges.

Mike Hawes, SMMT Chief Executive, said: “Brexit uncertainty has already done enormous damage to output, investment and jobs. Yet this is nothing compared with the permanent devastation caused by severing our frictionless trade links overnight, not just with the EU but with the many other global markets with which we currently trade freely.

“Brexit is the clear and present danger and, with thousands of jobs on the line, we urge all parties to do whatever it takes to save us from ‘no deal’.”

Other future models planned for Nissan Sunderland Plant - the next-generation Juke and Qashqai - are unaffected.

Nissan has updated the Juke with a number of new features and design upgrades, the new car made its public debut at the 2018 Geneva Motor Show.

A decline in vehicle sales caused by Brexit could dissipate within a few years, according to the results of a new poll by Paragon.