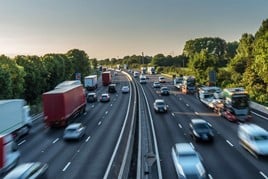 Europe’s 13 top car manufacturers are predicted to miss their 2021 CO2 emissions targets and face fines of more than €14.5bn (£12.5bn), according to analysis by PA Consulting.

The latest figures suggest a backwards step on previous predictions.

Average CO2 emissions have increased across the board, mainly due to an increase in the sale of SUVs, higher-powered and heavier cars, a lack of low-emission options in showrooms and a shifting preference for petrol cars after the diesel scandal.

Michael Schweikl, automotive expert at PA Consulting, says: “Despite this ‘four steps forward, one step back’ situation, the good news is that there are many options open to car makers to reduce emissions and minimise future fines. But the urgency of the situation means they have to act quickly.

“Car makers are running out of time to improve performance quickly enough to avoid fines. Marketing, sales and pricing strategies that increase the take-up of low-emissions vehicles will be essential in getting manufacturers closer to the targets.”

Volkswagen could be fined as much as €4.5bn (£3.86bn) due to its high sales volumes across Europe.

Jaguar Land Rover would face the biggest impact from fines, according to PA’s analysis, facing a bill worth 400% of its 2018 profit.

Manufacturers face a number of options, which include discounting electric and plug-in hybrid vehicles to boost their sales, taking high-polluting vehicles off the market, developing service schemes that increase low-emission vehicle use, exploring mergers with other car makers and developing open platforms to extend electric tech. 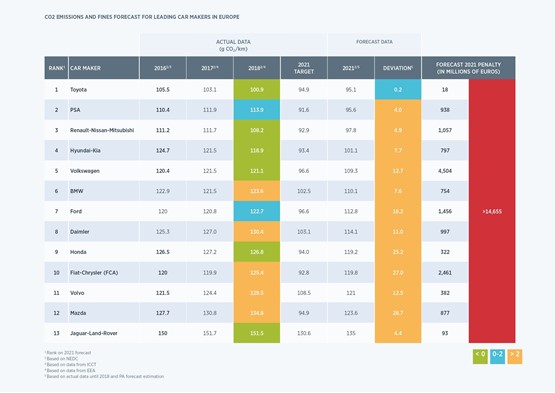 PA ranks each manufacturer by its CO2 performance forecast for 2021.

Toyota remains the best performer, PSA is now second, overtaking Renault-Nissan-Mitsubishi. Volvo, Volkswagen, Daimler and BMW are further from their target than last year. Jaguar Land Rover still has the highest CO2 emissions and is now in danger of missing its specific target.

PA’s analysis suggests that car brands would need to sell more than 2.5 million extra battery electric vehicles to stand any chance of meeting their targets, a 1,280% increase by 2021.

Production capacity constraints make this almost impossible – Volkswagen’s new production lines for the ID3, for example, have a capacity to produce 100,000 units in 2020.

From a country perspective, the report reveals all except Norway and the Netherlands saw a worsening in their overall figures.

The Netherlands was the second-best performer, but a long way behind Norway, with emissions of 106g CO2/km and sales of fully electric vehicles making up six per cent of the total.

The UK saw a decline in emissions performance from 120.8 CO2/km to 125.1 CO2/km but an increase in electric vehicles sales to 0.7% of all new registrations.

Schweikl added: “Car makers will need to adapt to an enormous change in what they do as they move from the technology of combustion engines to low-emission electric vehicles. While much exciting technological development is already underway, manufacturers cannot underestimate the complexity, cost and cultural change required.”

Government targets for ultra-low emission vehicles (ULEVs) branded unachievable, although the fleet sector is committed to accelerating uptake where possible.

Vehicle manufacturers may have to meet tougher than expected CO2 targets for cars and vans after a European Parliament vote this week.

The majority of car manufacturers could face “significant fines” for missing their 2021 EU CO2 emissions targets, according to PA Consulting.