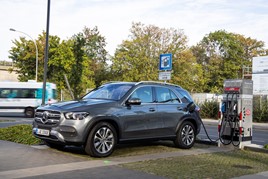 Mercedes-Benz has added plug-in hybrid versions of its GLC and GLE SUVs to its line-up.

They offer electric-only WLTP-certified ranges of 29 miles and 61.5 miles respectively, with CO2 emissions from 54g/km for the GLC and 29g/km for the GLE.

The GLC 300 e 4matic is available in both SUV and coupe bodystyles and features a 2.0-litre petrol engine paired with a 13.5kWh battery.

This gives an electric-only range of 27 miles, fuel efficiency of up to 128mpg and CO2 emissions of 51g/km.

A 7.4kWh on-board charger means the battery can be charged via a 7.4kW chargepoint in less than two hours.

If registered after April 6, the figures put it in the 13% company car tax band for the 2020/21 tax year in rates announced by the Government last year, and although these figures have yet to be adopted, it is expected they will be confirmed in the March Budget.

Under the expected BIK rates, a 40% taxpayer would face a monthly bill from £215, if the car is registered after April 6.

A 7.4kW combined on-board charger is standard, allowing the battery to charge form 10% to full in 3.25 hours.

Mercedes-Benz has announced the pricing, specification and CO2 emissions for its new compact SUV, the GLA.