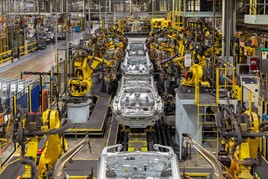 Fleet and business registrations, when taken together, fell by 2% in January when compared to the start of last year, according to figures published by the Society of Motor Manufacturers and Traders (SMMT).

Continuing low consumer demand was a key driver behind the decline, with registrations by private buyers down 13.9%.

Registrations of new diesel cars also fell for the 34th month, by 36% to record the weakest performance since 2000 and just 19.8% share of the market, while petrol demand also declined, by 9.5%.

Battery electric vehicle (BEV) registrations, meanwhile, continued to surge, up 203.9% to 4,054 units and a 2.7% market share. Combined, alternatively fuelled vehicle registrations reached 11.9% of the market in January – the highest on record, up from 6.8% in the same month last year.

The figures come a day after government announced its ambition to end the sale of all vehicles with an internal combustion engine, including HEVs and PHEVs, by 2035.

Hybrids and plug-in hybrids are zero emission capable, bringing significant environmental benefits today and are an important stepping-stone in helping motorists make the switch to a zero-emission vehicle, claims the SMMT.

These vehicles, alongside the latest low emission petrols and diesels, have a vital role to play in the transition to zero emission transport and an outright ban will hamper innovation and hold back progress.

Mike Hawes, SMMT chief executive, said, “The new car market is a key driver of the UK’s overall economy, so another month of decline is unsettling.

“Consumer confidence is not returning to the market and will not be helped by Government’s decision to add further confusion and instability by moving the goalposts on the end of sale of internal combustion engine cars.

“While ambition is understandable, as we must address climate change and air quality concerns, blanket bans do not help short-term consumer confidence.

“To be successful, government must lead the transition with an extensive and appropriately funded package of fiscal incentives, policies and investment to drive demand. We want to deliver air quality and environmental improvements now but need a strong market to do so.”

For the UK market to stand any chance of meeting the extremely challenging 2035 goal, an extensive package of government support is vital, it argues. These measures must support a smooth and sustainable transition for industry and consumers, whatever their income or driving needs.

Industry continues to call for Government to have a long-term commitment to the Plug-in Car Grant – which is currently set to expire in March – and that it should be extended to cover all Ultra Low Emission Vehicles (ULEVs), whether plug-in hybrid, full battery electric or hydrogen-fuelled.

The clear evidence from other European markets of the negative consequences of removing incentives before the market is ready should be a key consideration.

Government must also commit to a massive and urgent uplift in public charging infrastructure, says the SMMT, ensuring an adequate mix of the right chargers in the right places is deployed in a coordinated fashion throughout the country. To encourage the adoption of electric vehicles, consumers must find charging as easy as, if not easier than, refuelling.

Jon Lawes, managing director of Hitachi Capital Vehicle Solutions, said: “Our own research highlighted that 62% of consumers support the move towards electric vehicles and these figures show that the masses are becoming increasingly confident in the options available.

"With changing consumer habits and a range of exciting AFVs launches expected this year, we expect the market to continue to expand in 2020.

"However, with new car registrations down 7.3% in January and private demand also falling 13.9% in the same month, the reaction to the overall market is challenging.

"We’re at a crossroads with the rise of AFVs, and uncertainty around the future of petrol, diesel and hybrid cars amongst consumers and fleet managers is causing some to hesitate on newer models.

"The Government’s ambition to end all sales of petrol, diesel and hybrid cars by 2035 is a step in the right direction to end this confusion and move towards a cleaner and more sustainable future for the UK car industry.

"However, this is an ambitious target, and further support is required to provide clarity on topics such as Clean Air Zones and the Plug-in Car Grant, to provide consumers and fleets with a much-needed confidence boost.

“Hybrid vehicle owners may also be surprised to see the ban of hybrids alongside petrol and diesel models, with hybrid vehicles of any type now accounting for 16% of the market.” 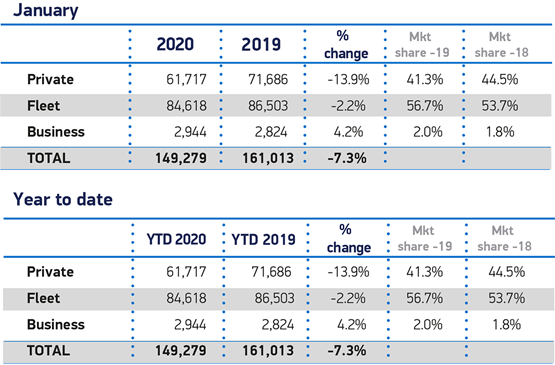 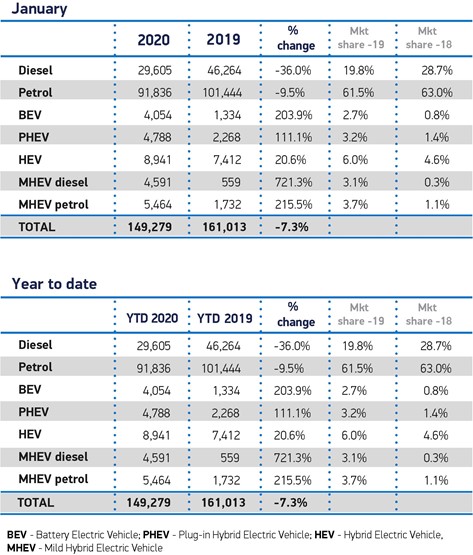 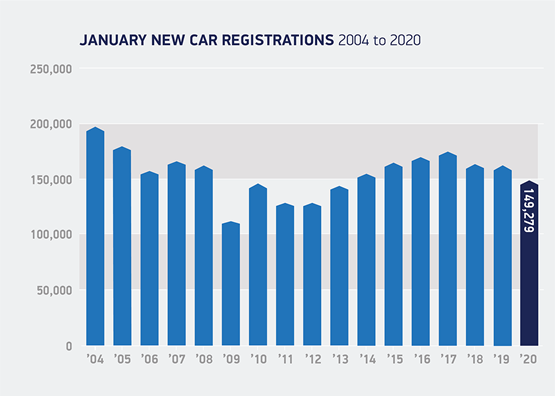