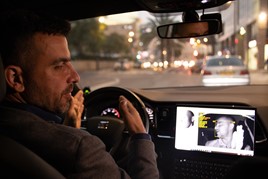 Seat is working on a new artificial intelligence technology that studies a driver’s eyes and head movement to detect if they’re falling asleep or distracted.

It’s the brainchild of the Spanish brand’s Xplora team, in conjunction with Eyesight Technologies.

The system uses an algorithm which analyses the eye openness, angle of vision, blink rate and head position of the driver, along with other visual attributes.

In the event it detects that the driver is drowsy, asleep or perhaps distracted by their mobile phone, it will trigger an alert.

The technology can also identify the driver from previous trips and adjust the seats, mirrors, heating settings and other cabin features according to their personal preferences.

Eventually, the software will be able to detect pedestrians and analyse whether the driver has spotted them as well.

Stefan Ilijevic, head of product innovation at Seat, said: “In total more than 90% of the road accidents in Europe are caused by human factor. The main reasons include distraction and tiredness, excessive speed and alcohol and drugs.

"At Seat we are working on solutions to prevent negligence behind the steering wheel and significantly reduce road accidents.

"We partner with some of the world's brightest companies on important technology to save lives, since our long-term vision is a world with zero accidents.”

Seat is also working alongside Gauzy, which is developing an active glazing technology that adapts to the weather conditions. It gives the driver the ability to darken windows, within legal limits, to avoid being dazzled by the sun while lighten the windows in darker environments and weather conditions.

Seat launched Xplora with Champion Motors, which is the Volkswagen Group’s brand importer in Israel, and in two years has worked with more than 200 emerging Israeli businesses.

The team is responsible for finding solutions that enhance well-being and safety, cybersecurity, sustainability and artificial intelligence.

The aim is to carry out at least 10 proofs of concept every year to test how selected innovations would adapt in vehicles and services.

Ilijevic added: “If you want to be a leader of the disruption in the car industry instead of a spectator, then not only do you have to be in Tel Aviv, but in the world's other major technology hubs as well.

“If we want to shape the future, we have to be in the most innovative ecosystems.

“It not only enables you to be the first and apply new technologies, but you can also attract the best talent, as they want to work in companies that are spearheading change.”

Seat UK has named Craig Cavanagh as its new head of fleet, replacing Peter McDonald who left the business in August.