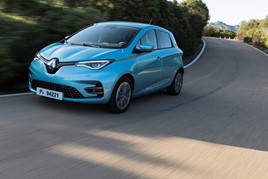 Electrified car sales have grown across Europe, while overall new car registrations remain in decline, according to Jato Dynamics data.

The market share of electrified models stands at 16.2%, which closes the gap to less than eight percentage points compared to the market share for diesel cars. Hybrids accounted for half of the segment registrations.

Felipe Munoz, global analyst at Jato Dynamics, said: “Despite the decline in consumer confidence and employment, the new landscape seems to be offering a prime opportunity for electrified cars – one not seen since their introduction.

“The combination of greater offers, better deals, higher incentives, and more consciousness among consumers for a green future, is boosting EV demand more than ever.”

Uncertainty continued to spread across the European new car market in June, however. Figures show 1.13 million units were registered last month, indicating a drop of 24% compared to the 1.49 million new cars registered in June 2019.

The UK was one of the worst performing markets, with registrations 49% down on June 2019. France was the only country to achieve growth, with a 2% uplift in new car sales. 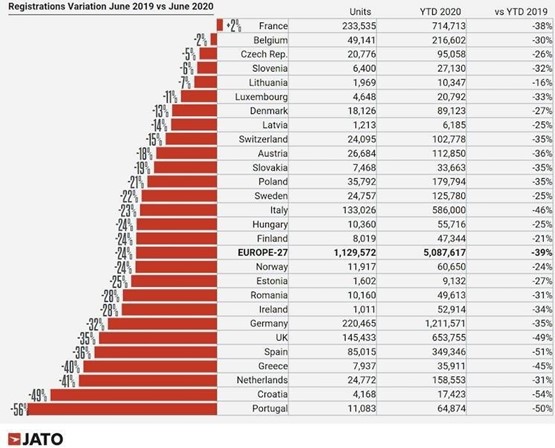 Although a large decrease from last year, June saw a positive increase month on month, with the strongest result since February 2020, when the COVID-19 pandemic hit the continent.

Despite the difficult economic landscape, SUVs performed well increasing market share to 40%. The largest, most expensive SUVs posted the best performance, with registrations down by only 2% to 24,100 units. Compact SUVs saw a 21% decrease and were outsold by small SUVs whose volume totalled 184,800 units. 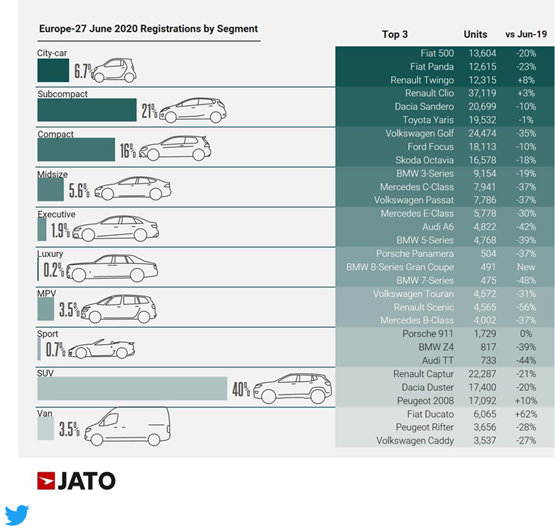 Volkswagen Group was the top seller in this segment with a market share of 25%. However, Ford, Volvo and Mercedes broke the trend by recording increases of 1%, 39% and 24% respectively.

When looking at the most popular models, the Volkswagen Golf was knocked down to the second spot for the second time in a row by the Renault Clio in June. Product availability of the new generation continues to be the main issue.

The Renault Clio fifth generation is available across all European markets – with its volume accounting for 79% of the model’s total registrations – while the Volkswagen Golf eighth generation is yet to arrive in every market, resulting in a smaller 28% share of the compact’s total volume.

New car registrations took another blow in May, as the Coronavirus pandemic continues to cripple the car industry.

Diesel and unleaded new car registrations in Europe decreased by 59% and 52% respectively in May, new figures from Jato Dynamics suggest.