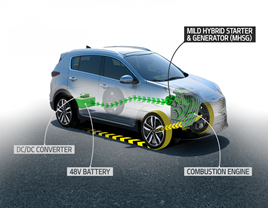 More than 1,200 car derivatives are currently identified as Alternative Fuel Vehicles (AFVs) and are eligible for tax breaks, according to Cap HPI.

The data company has reclassified mild-hybrid cars as AFVs, following an announcement by the DVLA and HMRC that these vehicles qualify for the same tax discounts as hybrid and plug-in hybrid cars.

Initially, it was ruled that because these vehicles would never be propelled by electric power alone they would continue to be taxed for both their VED and BiK as a conventional petrol or diesel engine.

Due to the rule change, there are now several ranges where the mild hybrid variants are being taxed at the lower rate for alternative fuel vehicles, including non-RDE2 (Real Driving Emissions) compliant Diesel models.

Mild hybrids use a starter/generator to capture electricity during coasting and braking and provide a small power boost during acceleration.

Some vehicles combine mild-hybrid technology with a 48v electric system, which enables the car engine to be switched off but all the comfort and convenience systems to continue working, such is in stop start traffic or when costing at higher speeds.

More tax-efficient types of diesel vehicle can also be identified through RDE2 certified models. RDE2 diesel cars, which are exempt from the standard 4% BIK diesel surcharge, now account for more than 35% of all diesel vehicles on Cap HPI’s database.

Jon Clay, head of vehicle identification at Cap HPI, said: “Everyone at Cap HPI has worked hard to ensure that we lead the industry in providing the data companies need to operate efficiently and profitably under WLTP regulations and it’s important that fleets are able to stay on top of the evolving taxation regime.

“We’re able to take this data and discover unique and important insights for our customers that will help them conduct new business even more profitably and provide better options for their customers.”

How can businesses navigate the transition to alternative fuel fleets?

By Paul Holland, managing director for UK Fuel at Fleetcor

BMW will introduce a new mild-hybrid diesel engine in the 320d, reducing its CO2 emissions from 110g/km to 105g/km (NEDC correlated).