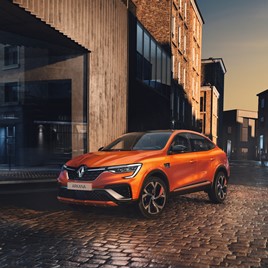 Renault has confirmed it is to expand the reach of its E-Tech hybrid powertrains across more models.

The manufacturer already offers plug-in versions of its Megane estate and Captur, as well as a hybrid Clio.

At its eWays event, a forum dedicated to exploring the future of electric mobility, is announced it will also produce hybrid versions of its new Arkana SUV and Captur, as well as a Megane hatch PHEV.

The Arkana SUV arrives in Europe in 2021 with an E-Tech hybrid powertrain and 12V mild-hybrid technology paired with its petrol engines.

The hybrid, which uses the 1.6-litre petrol engine combined with a lithium-ion battery and two electric motors, driven via an intelligent multi-mode clutchless gearbox offers, 140PS

Paired with the EDC dual-clutch automatic transmission, the TCe 140 engine produces 140PS and 260Nm of torque from 1,600rpm.

The Captur is Renault’s most popular model in the UK, and shares its E-Tech hybrid powertrain with the Clio and Arkana models.

At the same time as the introduction of the new electrified powertrains, a new R.S. Line trim level joins the line-up.

This features redesigned front and rear bumpers featuring an F1-style front blade across the front bumper, along with exclusive alloy wheels.

Inside, black headlining, unique upholstery with red stitching and carbon-style trim details distinguish the Captur R.S. Line from the rest of the range.

Renault’s E-Tech PHEV powertrain will be introduced to the Megane Hatch line-up following its introduction in the Megane Sport Tourer.

Using a 1.6-litre petrol engine combined with a 9.9kWh battery and two electric motors, the PHEV provides 160hp and can travel up to 30 miles in pure electric mode.