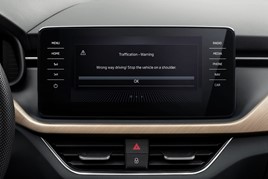 Skoda has developed a new app that can warn drivers if they are driving on the wrong side of the road.

The Traffication app can be downloaded onto the infotainment system of compatible vehicles.

More than a quarter of drivers surveyed by Skoda admitted to having driven a road in the wrong direction at least once, with 15% of drivers owning up to repeating the error multiple times. 41% of respondents said that they knew someone who had mistakenly done so, while 65% had witnessed another driver doing it.

Instances of wrong-way driving were recorded across a wide variety of the UK’s roads. Almost one fifth of motorists experienced the threat on a dual-carriageway with 11% of drivers doing so on motorways.

The new Traffication app, developed in collaboration with Bosch, provides early alerts and vital information on traffic issues and hazards.

As well as alerting drivers to their own potential mistakes, the new application can also draw their attention to dangers which are already developing ahead, such as a vehicle with its hazard lights on.

Traffication is available for Superb, Karoq and Kodiaq vehicles equipped with the Columbus infotainment system and the Amundsen system in the Scala and Kamiq. It can be downloaded from the Skoda Shop.

The app will be made available to other models later this year.