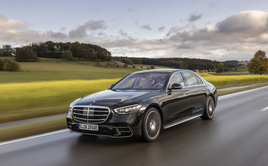 The new model is priced from £104,490 and comes exclusively in long-wheelbase configuration.

It uses a 3.0-litre six-cylinder petrol engine, combined with an electric motor and 28.6kWh battery, to deliver 509PS.

The CO2 emissions figure for the car is 18g/km, while its claimed fuel consumption is 353mpg.

An electric-only range of 63 miles places the car in the 7% benefit-in-kind (BiK) tax band.

The battery can be recharged from 10%-80% in 20 minutes using a DC rapid charger and in less than four hours using a 7.4kW wallbox.

The AMG Line Premium Plus is priced from £109,385 and adds an augmented reality head-up display, heated centre armrest and door panels and 21-inch wheels.

The Mercedes S 580 e is available to order now and will arrive in the UK towards the end of the year.

Mercedes-Benz has unveiled the EQS, a high-power long-range luxury electric car that will sit alongside the S-Class.

Mercedes-Benz will be ready to become a fully-electric car brand by the end of the decade, following a ramp-up in development of zero-emission vehicles.