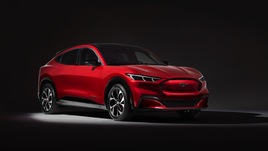 Ford is to make electric car parts at its Halewood plant on Merseyside as part of a £230 million investment in the factory.

The decision will help safeguard 500 jobs and ensure the plant, currently produces transmissions for internal combustion engines, runs for many years longer, Stuart Rowley, president of Ford of Europe, told the BBC.

It will begin manufacturing electric power units in 2024.

Rowley said: “We’re really pleased with the support from the UK government. We’re not disclosing the exact amount, but it was a good support for what is a very significant investment in the UK.”

Currently the manufacturer offers two electric models: the Mustang Mach-E and the electric Transit. These are available alongside the plug-in hybrid Kuga SUV.

Julian Hetherington, APC automotive transformation director, said: “We are delighted that Ford has made this commitment to the UK and the Halewood site.

“We know the insight and capability gained from various APC-supported projects, together with the ATF funding from Government to support the transition of its operation, put the Halewood site in a really strong position.”

ATF funding will support the transition of operations there and use and enhance existing skills of the workforce to manufacture electric drive units which, in simple terms, control all the elements that move the wheels on an electric vehicles, including the speed, torque and direction.

Hetherington added: “Our insight has identified more than £24 billion of opportunity in the UK for the EV  passenger car market alone and £12bn of this is in power electronics and electric machines.

“So, while this is excellent news for the teams we have worked with across Ford UK, it will also benefit the supporting UK supply chain for electronic drive units and could potentially lead to more jobs in British businesses supplying the Halewood site.”

In July, Nissan announced a £1 billion electric vehicle hub - Nissan EV36Zero - at its plant in Sunderland.

Nissan said that the EV36Zero project brings together EVs, renewable energy and battery production, setting a blueprint for the future of the automotive industry.

"It’s also a stamp of approval from inward investors, signaling their confidence in the UK’s position within the global EV industry.

“Other carmakers. such as JLR, also have well-publicised plans to meet clean air and zero emissions regulations by moving to EVs over the next five years.

"As such, we’re likely to see more automotive manufacturers following in Ford’s footsteps in the near future.

“However, while these kinds of announcements bode well for the UK’s net-zero transition, it’s important to bear in mind that a significant investment in Gigafactories will also be vital.

"This will be the next big challenge for the Government and will be key to level the playing field with other major EV manufacturing hubs.”

Ford has revealed an updated version of the Fiesta, which is due to arrive in early 2022, priced from £16,620.

Ford has revealed its all-new multi-activity vehicle, the Tourneo Connect, with seven-seat capability and a choice of two lengths.