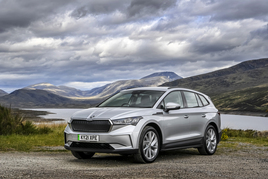 Skoda has increased the maximum charging speed of it electric Enyaq iV model as part of a suite of updates for the model.

Following its introduction last year, the Enyaq now offers DC charging speeds of up to 135kW.

The new Battery Care Mode, which is controlled via the infotainment screen, has been designed to set the optimal charging settings for extending the life of the battery. When activated the next charging process will charge to a maximum of 80%.

The graphic displays of the infotainment system have also been updated to deliver even more information. Drivers using the navigation system will be able to see an estimated battery level on arrival when a destination is programmed. Skoda says this is particularly useful for planning charging stops. In addition, the charging screen has been redesigned to show more information plus extra functionality including AC charge options and predefined charging and preconditioning for the cabin.

Customers choosing the Assisted Drive Package Plus with Travel Assist benefit from additional features, too. These include Narrow Lane Assist where the car recognises temporary yellow lines, barriers and cars in the next lane and guides the car through narrowed spaces. In addition, the steering wheel travel assist button will now allow drivers to toggle between travel assist modes as well as activating and de-activating the system. When the vehicle is started again the last mode used will be active.

All new Skoda Enyaq iV models will be fitted with upgraded DC fast charging as standard, the manufacturer has announced.