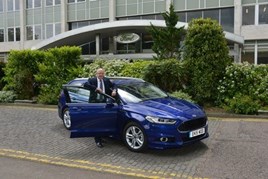 Andy Barratt has been appointed chairman and managing director at Ford of Britain, from July 1, 2015.

He was a district sales manager in Ford of Britain before his role as director FCSD, and before that had led the UK sales teams for five years in the Eastern and Northern districts.

Roelant de Waard, vice president of marketing, sales and service, Ford of Europe, said: "Andy has a wealth of experience in the UK business that makes him well placed to manage Ford's biggest European market and to take on the chairman's responsibilities, representing Ford on key issues such as the future of UK automotive manufacturing, skills, research and development, and the low-emissions agenda."

Jim Farley, executive vice president and president, Europe, Middle East and Africa, said: "I am delighted to welcome Mark back to Russia following a successful period improving sales and increasing the quality of our business in Britain.  He is well equipped to deal with the current difficult market conditions in this market as well as the tremendous potential it offers."

Fleet Poll
Was it a good Budget for the fleet industry?
Vote
View all
63