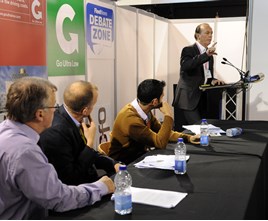 Fleets were challenged to go ‘green’ by choosing ultra-low emission vehicles during a debate at Company Car in Action (CCIA) hosted by television presenter Quentin Willson.

Registrations of plug-in and hybrid cars have risen dramatically recently, with sales up 420% since the start of the year, but they still only represent a fraction of new car sales.

Concern over residual values, battery depletion and range anxiety are frequently cited as barriers to the adoption of electric vehicles (EVs). However, fleet decision-makers at CCIA were given the inside track on alternative fuels.

Gateshead Council has been a long-term advocate of alternatively powered vehicles, having employed LPG, biodiesel and electric vehicles on its fleet.

Graham Telfer, fleet manager at Gateshead Council, said: “We’ve operated EVs for five years and we have never seen any battery depletion. We’ve also never had anybody run out of charge. It’s just not a concern at all.”

Starting with only four cars from a small riverside office in west London, Green Tomato Cars was launched as London’s first green minicab service in March 2006.

Today, it operates a fleet of 550 vehicles that consists almost entirely of Toyota Prius hybrids. Hamish Phillips, from Green Tomato Cars, said: “We’ve driven over 40 million miles in the Prius and we’ve had minimal problems. We also get fantastic fuel consumption of about 60 miles per gallon-plus.” However, Phillips was unsure which technology would come to the fore next.

“Is it electric or hydrogen? We don’t know, but we think one of these technologies is the future,” he said.

Future fuel expert Dr Aman Dhir, from the University of Birmingham, is an advocate of hydrogen. He said: “If you really want to have a vehicle where range anxiety isn’t an issue, then hydrogen is the way to go.”