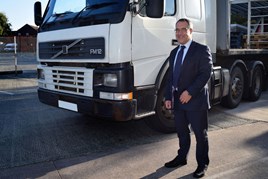 Satoor had held the position of deputy chief executive since March and, prior to that, he was director of organisational development and strategy at DVSA.

He takes up the leadership of DVSA while work is underway to recruit a permanent successor.

He said: "I’m excited to be taking up the role of interim chief executive at what is an important time in DVSA’s development.

"I want to continue the good work that has been done to make our organisation more efficient and effective, as well as engaging with customers and businesses to make sure that we put them at the heart of our services."

In his previous role as director of organisational development and strategy, Satoor was responsible for developing DVSA’s corporate vision and strategy.

He also oversaw the agency’s major projects, such as the introduction of a more flexible service for heavy goods vehicle testing.

He has a background in senior HR roles across the public and private sectors.