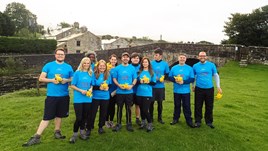 Nexus Vehicle Rental has raised more than £2,000 for the Yorkshire Air Ambulance, by completing the Yorkshire Dales’ Three Peaks challenge for a second consecutive year.

A team of 11 walkers from the Leeds based company reached the summits of Pen-Y-Ghent (694m) and Whernside (736m), while eight went on to scale Ingleborough (723m).

They completed the challenge in less than 12 hours, walking close to 28 miles in the process. Conditions were made difficult by thick fog, meaning visibility was down to just two metres - extending the normal route of 24.5 miles.

Naomi Dyer, marketing executive at Nexus, said: “We returned to take on the punishing Three Peaks challenge in aid of the Yorkshire Air Ambulance for the second consecutive year.

“It was far tougher this time around due to adverse weather but everyone battled through to complete a great team and personal challenge. It was worth the early start and extra effort to have raised a significant amount for a vital local charity which provides life-saving services to more than five million people across England’s largest county.”