McNally to head up remarketing at Alphabet 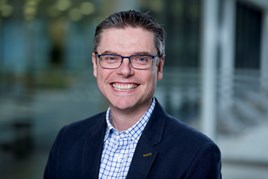 Alphabet has announced that Jim McNally has moved from his role as head of asset risk to become the company’s new head of remarketing and logistics.

McNally has been with the business for nine years in various roles involving asset risk and was also previously chairman for the BVRLA’s Residual Value and Remarketing Committee.

Over the past few years McNally has overseen the expansion of the risk function within Alphabet and now moves to a new challenge within the business to head up the remarketing operations.

McNally said: “I’m hugely excited by this new challenge. Having managed and led the asset risk side of the Alphabet business for the past few years, I’m looking forward to bringing this knowledge and approach into the area of remarketing.

“The new role is a key strategic one for the Alphabet business moving forward, to meet the challenges of the changing market, take advantage of developments in technology and digitisation as well as investigate new routes to market.

“We already remarket approx. 40,000 vehicles per annum effectively so my role is really to get under the bonnet of every part of our operation to identify the key areas for growth and development, plus completely new areas that we need to be working on and active in.”

Matt Sutherland, chief operating officer for Alphabet, explained: “With Jim’s experience of both the industry and the business, he was the natural choice for this role.

“Jim’s appointment reflects our greater focus and resourcing into this crucial area of the business. With a growing fleet of over 155,000 vehicles on the road, clearly remarketing is an area which we feel presents a significant strategic opportunity to us and one which we can bring real innovation to.

“We’ve historically been strong in the area of Remarketing but with Jim at the helm we feel we can take our operations to the next level.”