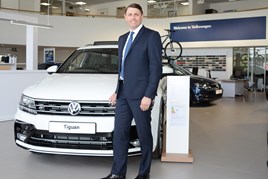 Tanner started at Alan Day as a parts driver when he was 19, then joined the parts department and quickly moved up the ranks. He then spent two years as an apprentice in the service department - his duties included installing sun roofs, alarms and cruise controls to vehicles.

He was promoted to supervisor in the parts department, service manager, then aftersales manager and general manager.

The former athlete, who played football for Watford and represented Britain in the hurdles, had to cut short his athletics career through injury.

But what he lost on the track proved to be a victory for the motor trade as he transferred his determination and desire to succeed into a successful business career.

He said: “When I was an athlete, I trained every day and always had a strong work ethic. When I joined the company I simply transferred those values and threw myself into everything. I’m not sure what health and safety would make of it these days but I could often be found standing on top of cars cutting holes so a sun roof could be put in.”

By the time owner, Alan Day was thinking of retiring in 2006, he had already groomed Tanner to step into his shoes. He said: “I learnt a lot from Alan Day, who was a stickler for detail and demanded everything should be perfect. The cars had to be spotless and the service to the customer had to be perfect through all departments.”

Tanner, 49, who lives in Hendon, puts his success down to hard work and being in the right place at the right time.

He celebrated his 30- year anniversary with staff in Hampstead to mark the occasion.