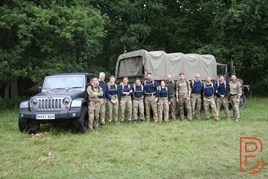 Aston Barclay has introduced Special Forces techniques as part of its drive to achieve ambitious growth plans to double sales in the next five years.

In an industry first, vendor and buyer partners are also being given the chance to take part alongside auction group employees and a finance company has already taken up the leadership challenge.

The SAS-inspired training delivered by Break-Point is led by Ollie Ollerton, who features in the TV programme SAS: Who Dares Wins, and is designed to put people under pressure to push them beyond their limits and show barriers to ultimate success are often in the mind.

Ollie Ollerton, Break-Point’s CEO, said: “We inspire people to go that extra mile for customers and their fellow colleagues by getting them to turn up their performance levels and build seamless camaraderie between their teams. It’s refreshing that Aston Barclay is adopting a different approach to investing in its colleagues and customers.”

Some of the first to attend the primary two-day session were the new recruits who have recently joined Aston Barclay. This includes group account manager Ellie Phoenix who is heading up the customer service team, national group sales manager Rob Wittridge, recently promoted to his new national role and group buyer services manager, Zoe Sutton.

Future courses are planned for the remainder of the year with the first group of vendor teams attending in September and new recruits to Aston Barclay being put through the programme in the near future.

These include David Rouse and Gordon Cockle who join from Manheim as operations manager and group auctioneer respectively at the new Donington Park Mega Centre, Alan Fowley as group auctioneer, Harriet Butler, formerly of CAP hpi, who has started as business analyst helping to drive Aston Barclay’s digital strategy forward following the success of its new Buyer App, and Sam Leigh as business development manager at Donington.

Westbury centre manager Danny Davis who attended the kick off mission commented: “The key benefit for me was the feeling of ‘digging deep’ to get the mission completed when tired and in unfamiliar territory. It was a great reminder that having a secondary plan is useful in all environments.”

Aston Barclay’s CEO Neil Hodson added: “Our DNA is all about employing quality people that provide exceptional customer service and results through the adoption of a fresh and very different remarketing approach to our large corporate rivals.”

Aston Barclay has launched its new Buyer App, which is free to download on the app store in Android or IOS format.

Aston Barclay is set to double sales under new management

Hatfields Group, one of the oldest Jaguar dealerships in the world, has chosen the Aston Barclay Group to shape its new remarketing strategy.