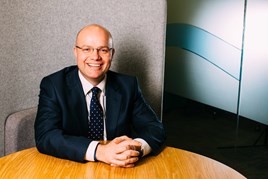 Martin Barrow-Starkey will be taking over from Patrick McGillycuddy as head of group fleet services for Volkswagen Group UK.

McGillycuddy has moved to a senior role within the Volkswagen Passenger Cars brand in the UK.

Barrow-Starkey, who will take up his new position on March 1, joins the group fleet services team after working for Volkswagen Group retailer learning services, which he has headed for the last two years.

During his tenure, the learning services team delivered record-breaking numbers of apprentices and qualified staff for the Group’s brands nationwide.

In his new role, Barrow-Starkey will be tasked with moving the fleet division into a new phase of its development, including implementing the new demonstrator and business centre contracts and delivering high quality services to the brand fleet teams.

A chartered electrical engineer, Barrow-Starkey has a broad range of business and leadership skills gained from 18 years working in multiple industries.

He joined Volkswagen Group UK in 2011, carrying out roles as head of group parts operations and head of sales operations at Skoda.

Barrow-Starkey will report to Alistair Shields, group commercial services director for the Volkswagen Group. Shields said: “I’m very happy to welcome Martin to the group fleet services team at this exciting time for the business.

“He will be building on Patrick’s great work, and I’m looking forward to seeing the successful development of this key element of our UK operations.”

In 2017, Volkswagen Group UK sold 560,934 vehicles across its five brands, above half of which were fleet sales.

The Volkswagen Group has announced a strategic partnership with technology company Aurora to bring self-driving electric vehicles to cities as mobility-as-a-service (MaaS) fleets.