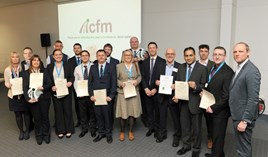 The work of Steve Hook, ICFM training manager since the organisation launched in 1992, was recognised when he was one of two recipients of an ICFM Honorary Fellowship.

Initially working in the contract hire and leasing sector, he has gone on to launch consultancy Colin Tourick & Associates, is Professor of Automotive Management at the University of Buckingham Business School, co-founder of the International Auto Finance Network and the author of eight books on fleet management.

Profession Tourick, said ICFM chairman Paul Hollick, was “a man who has pushed the boundaries of education in our industry. As an author, his books are vital reads for our members. He has helped a generation of fleet managers to be more knowledgeable and better developed”.

Hollick said Hook, who has been an ICFM board member, training and education manager and the only ICFM member since launch, was “an extremely important person to me and the industry. The guide for all students, taking them though the modules, supporting them and developing their skills - some that they never thought they had - he has marked the coursework of more than 2,000 trainees. He transforms people.”

The winner of the ICFM’s Career Development Award, which recognises personal advancement of their career or helping others advance theirs as a result of ICFM training, was Brian Hardwick, head of operations, Fleet Operations.

Many ICFM members who achieved a qualification in the past 15 months since the last Awards ceremony were recognised with their certificates presented by Scotland rugby legend Gavin Hastings.

CD Auction Group has become the latest company to sign-up to ICFM’s rapidly expanding Corporate Investor Programme and the first from the vehicle remarketing sector.

Record numbers of employees with fleet responsibility have joined the ICFM in the first two months of 2018.