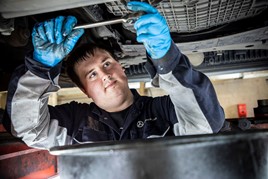 Stewart (pictured) was awarded the accolade having gone above and beyond in the workplace and at the Mercedes-Benz Apprentice Academy in Milton Keynes.

The award came having been nominated by managers, mentors, assessors and trainers on the basis of his determination, commitment, initiative and ability to work as part of a team.

Mercedes-Benz selected him from a shortlist of three finalists from across the UK and marks the second year in a row that City West Commercials has won.

Stewart said:  “I am really thrilled to have been recognised with this award by Mercedes-Benz. Having left school after completing my A-levels in geography, physics and product design, I wanted to prove to myself and my family that I could succeed without a degree.

“My three-year apprenticeship at City West Commercials has afforded me the opportunity to do something ‘hands on’ and I have received plenty of support along the way from the team.

“Being able to work on vehicles ties in with my interest in engineering, so I certainly don’t have any regrets about the path I’ve taken.  Best of all, this is so much more than just a job.

"I have a fulfilling career laid out in front of me. It’s up to me now, to make the most of this fantastic opportunity, which I’m determined to do.”

Avonmouth’s depot manager Jason Baldwin said: “We fully support William, he's a valued member of our team and we all want him to reach his end goal of being a diagnostic technician.

"Winning this award demonstrates recognition of City West Commercials investment in young people within in the industry.”

"We take great pride in knowing that all of our employees are trained to the highest of Mercedes-Benz standards, and with the support of our fully trained technicians we can guarantee the very best expertise and quality services via our Avonmouth depot which operates a 24 hour service.”