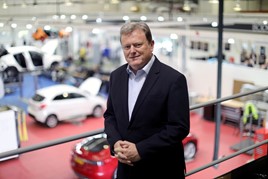 Shaw had led the automotive research company from 2011 before stepping down due to ill health in June, last year. He had been undergoing treatment for a brain tumour since January 2018.

“Thatcham Research’s increased relevance in the rapidly changing vehicle landscape, not just in the UK but many international markets, is a testament to his deep understanding of the market, his thought leadership and team-working ethic that he made part of the company’s DNA.”

Shaw had been chief executive as well as a board member for seven years, and steered Thatcham Research through a period of notable change, with the company increasingly recognised as a global centre of excellence for assisted and automated driving assessment and testing.

He initiated a research strategy which reflected this fast pace of change in the automotive market – and more importantly, kept ahead of it, with thought leadership and rapid development of safety standards, said Thatcham.

Graham Gibson, chairman at Thatcham Research, added: “Very rarely in life do you meet an individual who is as charismatic and generous as Peter. Not only is his passing a great loss to his family and friends but also the wider insurance and automotive industry.

“We often talk about legacy, and very few can be as privileged as leaving such a great legacy as Peter.”

At this difficult time, Thatcham said its thoughts and prayers are with his family at this sad time, and would ask that their privacy is respected.

Thatcham warns carmakers use of the word 'autonomous' creates danger

Thatcham Research and the ABI (Association of British Insurers) is calling on carmakers to be careful how they describe vehicles sold with autonomous features.

Peter Shaw to step down as Thatcham Research's chief executive

Thatcham Research has announced that long-standing employee, Peter Shaw will step down from his role as chief executive with immediate effect, due to ill-health.

Hewett joins from Octo Telematics where he was global chief marketing officer and drove business growth at board level.