Leasedrive: How niche service turned into an industry standard 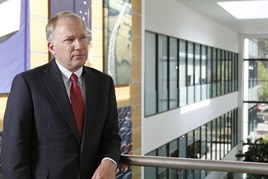 The past four years has seen unprecedented change in the leasing landscape. Mergers, the collapse in residuals values and restricted access to funding have forced all leasing company parents to reassess their policies and position in the market.

Some have exited; others have grasped the opportunity to grow, either organically or through acquisition. Yet others have opted to become more niche.

Leasedrive Group was an acquisitor. It has been one of the trailblazers in this changing industry ever since a new management team bought the business 10 years ago. Its philosophy focuses on sole supply, outsourced blue-chip customers, huge investment in IT systems and the belief that customer service and value partnerships are key, rather than competing as a cut-throat price-led business.

At the time, the team said Leasedrive would “re-write the rules on fleet management”. Three years ago chief executive David Bird told Fleet News it was mission accomplished, pointing to the trend for more leasing companies to focus on blue chip and sole supply.

During that intervening period, Leasedrive has itself gone through considerable change, though it has always sought to stay true to its original values.

In 2007 it merged with Velo, a similarly sized leasing company competitor, to form Leasedrive Velo. In 2010 it took on the assets of top five leasing provider Masterlease, after the business was acquired from Ally Financial by venture capitalist Investec.

Sat around a meeting room table at Leasedrive’s Crawthorne head office on a crisp January morning, the company’s main directors – chief executive David Bird, commercial director Roddy Graham and rental management director Joe Howick – are in self-proclaimed “ebullient mood” (in Bird’s case in spite of a poor run of form that has seen his beloved Bristol Rovers drop to the foot of League Two).

The past 12 months have been “a brilliant year” for Leasedrive, Bird says, unable to contain his euphoria. The merger of the Masterlease business has been almost without hitch – contrary to some sniping in the industry that customer service had been sacrificed - and has helped drive Leasedrive to a record level of profitability.

EBITA profits have risen by almost 50% year-on-year, from £5 million in 2010 to £10 million in 2011 and onwards to £14 million last year. Much of the 2012 increase was down to Masterlease: it had many high quality customers, certainly more than most industry commentators believed it had.

Bird identified 73 customers he wanted to keep from the Masterlease portfolio, accounting for around half its risk fleet vehicles; all, he says, were retained, including two sizeable fleets which were out to tender.

Pushed harder, he concedes that one other potential customer was lost after it issued an aggressive price tender. It’s not the market in which Leasedrive chooses to compete.

“These customers fitted our business values and they were also an organisational fit where we could add value,” says Graham.

“Not many were tenders that we were in a bid position for over the last five years. A lot of them tended to re-sign with Masterlease after a brief look at the market because it retained a service-led ethic. This culture made it easier for us to integrate the two businesses.”

Bird adds: “We knew customer service was in their DNA and that was the attraction to us. We had to demonstrate that we could be competitive on price and not only continue the service levels but improve upon them.”

The majority of Masterlease’s SME and white label business has been run off, primarily to brokers. The migration is now complete and it’s back to “business as usual”, according to Bird.

“The acquisition gives us scale in the part of the market where we want to be,” he says. “It means we can still be entrepreneurial and have our senior management out with customers but we now also have a scale to further invest ion service and technology. It’s the best of both worlds.”

Three of Leasedrive’s five biggest orders in 2012 came from Masterlease customers, while the other two came from new business won by Leasedrive last year. The biggest existing Leasedrive customer was in sixth place.

“Our success in winning new business in 2012 is proof that we didn’t just look inwards due to the integration work,” Graham says, in answer to the critics.

The enlarged business also gives Leasedrive an opportunity to sell its short-term rental and fleet management services to more customers.

Masterlease outsourced its short-term hire offering, but Leasedrive sees it as a core part of its service delivery. Almost all its retained Masterlease customers have signed up to a rental contract.

“The tender to hire process for rental contracts is about six weeks, but for contract hire it can typically be four to five months,” says Howick.

“Rental can sometimes get our foot in the door for contract hire – it did last year for an 850-vehicle fleet.”

The company sold 970,000 rental days last year, a 14% increase year-on-year. It also played a key role in the London Olympics, although it is only now allowed to talk about its involvement due to the lifting of PR restrictions.

The project was more logistics than the supply of metal. It involved 700 vehicles sourced from the major rental suppliers. The bulk of the vehicles were people carriers, many of which were unbranded and de-badged Fords (the Olympics brand police were out in force to protect BMW’s status as official sponsor).

Howick worked closely with the fleet operations team at LOCOG. He appointed a third party to check vehicles on collection for end of lease charges, which included taking images of any damage.

“We treated the cars like a contract hire vehicle rather than a rental vehicle so we had total protection on costs,” he says. “We re-charged any damage to the at-fault organisation or party.”

Leasedrive anticipates further growth this year. It is shortly due to sign a contract with a central government department which will add more than 2,000 vehicles to the risk fleet.

“The size of this fleet is bigger than the size of the Leasedrive fleet which David and I re-mortgaged our homes for,” quips Graham.

Growth may also come from acquisition. Bird says he “has a hit list of four companies in the FN50” he would consider buying, all of which have the right cultural fit and the right customers.

However, the leasing industry is littered with example of mid-size providers that have struggled to retain their focus on customer service after a prolonged period of rapid growth. How will Leasedrive ensure its business model doesn’t crumble?

“We have a small number of large fleets which gives us scalability - lots of vehicles but few customers,” says Bird. “Scalability on vehicles is not an issue as long as we have a low number of customers so we can maintain our service levels and our level of entrepreneurship.

“Our business plan has not changed in 10 years: it’s to be an entrepreneurial and flexible organisation with fantastic people investing in fantastic systems. We were right when we launched – this niche did exist; only now it’s no longer a niche.”

“We self-funded a customer’s sale and leaseback until the banks re-opened for business. It enabled the company to continue to order cars throughout the year. It was costly for us to do but we took a quick decision to help our customer and we had a very positive response from the fleet manager. It’s an example of how we approach problems from a different perspective.” Roddy Graham

“We have made an assumption that we can grow at the same rate as we did last year. We are back to acquiring a new customer every month.” David Bird

“The over whelming response was all about their customer service teams and not shutting the Birmingham office. So we didn’t and we are now investing in new premises in Birmingham.” David Bird

“The market is diverging between banks that want to provide funds but don’t want to be in service provision and the service providers. There is more consolidation to come at the top end. In three years’ time we will see less bank-owned and more manufacturer-owned leasing companies.” David Bird