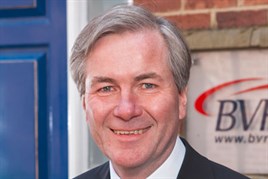 The BVRLA's Chief Executive Gerry Keaney on the 2014 Budget.

George Osborne said he was extending support for low emission vehicles, but there was precious little evidence of that when you examine the detail.

The Chancellor said he was extending the 2% increase in company car tax in 2017/18 and 2018/19, but brushed over the fact that he was also raising the tax rate for zeroemission vehicles at twice that rate – by four percentage points – in the 2018/19 tax year. It means a company car driver choosing a zero-emission vehicle this year would see their company car tax rate rise from zero to 13% within four years.

On a car such as the electric Volkswagen e-Golf, that means an employee paying tax at the 40% rate would see their bill soar from £0 per year to nearly £1,600. By 2018/19, the driver choosing the e-Golf would be paying almost exactly the same amount in company car tax as if they had chosen a diesel Golf with all its particulates, CO 2 and NO x emissions.

The tax incentive will have gradually vanished. Earlier this year, the Government reiterated its goal of moving the UK’s car fleet to ultra-low emission vehicles by 2040. Policymakers claim the fleet sector is a key market for electric vehicles because it already operates the cleanest cars on UK roads and makes purchasing decisions based on rational, cost-of-ownership calculations.

By tweaking the tax regime, the Government knows it can influence these calculations and make choosing an ultralow emission vehicle an obvious choice for thousands of businesses and their drivers.

Instead, as a reward for operating the lowest emitting vehicles on UK roads, company car drivers are being asked to pay an extra £720 million in tax over the next five years.

Meanwhile, hundreds of thousands of grey fleet drivers are encouraged to do extra mileage in their older, more polluting cars because the Government hasn’t got the nerve to tackle the issue of inflated AMAP (approved mileage allowance payment) rates.

Where is the ultra-low emission logic in that?