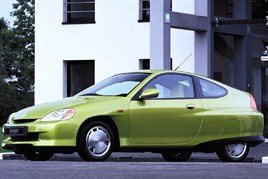 Talk of CO2 emissions at just 80g/km and 83mpg on the combined cycle, would suggest I'd been driving the latest hi-tech economy model.

Other figures of note were 11 and 290,000: the former being the age of the car in years and the latter, its mileage.

The figures belong to a Honda Insight I drove recently – not to be confused with the Honda Insight five-door hatchback launched in 2009.

This is one of the original Insight coupés launched in 2000, and is being retained by Honda UK for promotional purposes to demonstrate the reliability and durability of hybrid technology.

I drove the car recently to remind me what the future used to be like.

Back in 2000 when petrol-electric hybrids were a new and little understood concept, the Insight cost £17,000.

Toyota’s hybrid car – the more ‘conventional’ four-door, five-seat Prius – had a slightly lower asking price. Both were eligible for a £1,000 discount in the form of a grant through the government’s PowerShift scheme, which also incentivised LPG-converted cars.

But the Insight’s perceived (and actual) impracticality – it’s a two-seat compact coupé – probably worked against it as much as nervousness at its advanced technology. Fewer than 300 were sold in the UK.

As well as its electric motor-assisted performance, the car also had many aluminium body components and tipped the scales at just 850kg – even with the air conditioning as fitted in the car I drove.

This, along with the economical three-cylinder 1.0-litre engine, enabled it to achieve its 83mpg on the combined cycle and 80g/km.

Only now, 11 years on, are we seeing that kind of fuel consumption again, and the lowest CO2 emissions we are likely to see in 2011 from a car powered only by an engine is the forthcoming Kia Rio - 85g/km with its new 1.1-litre diesel engine.

I took the Insight on a 50-mile route that combined motorway driving (not the greatest environment for a hybrid, where it doesn’t take advantage of the electric motor assistance), and some mountain roads in Snowdonia.

It was on its second battery – but it was replaced fairly recently, and only because of a drop off in battery performance rather than any failure to perform.

Another modification was a modern aftermarket audio system with USB port that allowed me to charge my phone while driving.

Like all cars with a bias towards fuel economy, there were some flat-spots in the performance at low revs.

The Insight also comes with a five-speed gearbox, unlike many modern low-CO2 models, which either have six-speed manuals, or some kind of automatic transmission optimised for fuel economy.

The Insight must also be the first car that has a gearshift reminder that encourages changing up or down through the ’box at the best time.

But unlike many modern hybrids, it’s actually good fun to drive quickly. Agile when cornering, nimble when nipping through gaps in traffic, and like petrol Hondas of old (whisper it) quite an adrenaline rush above 5,000rpm.

The Insight yielded its position to more user-friendly hybrids in the Honda line-up – the Civic IMA saloon, the later Insight, the Jazz Hybrid and, of course, the sporty CR-Z coupé.

But it laid an important marker at the end of the 20th century of what can be achieved with hybrid technology. And, as we’ve discovered since, it was just the tip of the iceberg.