How can the UK gear up for an electric vehicle future in greener smart cities? 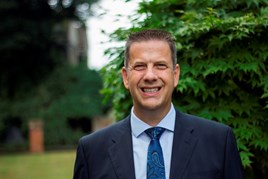 It’s little wonder that the UK government has made cutting emissions in cities a priority – people in the UK are 64-times as likely to die from the effects of air pollution as those in Sweden and twice as likely as those in the US (source).

The UK is working faster than any other G7 nation to make an impact. It is predicted that electric vehicles (EVs) will account for more than two-thirds (69%) of UK vehicles by 2050 and the number of fleets that run electric vehicles could rise by 28 per cent by 2021.

Fleets have historically had a bullish view of alternative fuels, but organisations are starting to wake up to the financial and environmental benefits of a green fleet.

With the British plug-in fleet now the fourth largest in Europe and a ban in place on sales of new, solely petrol and diesel cars by 2040, the clock is ticking for transport and energy ministers, and local authorities to ensure our cities are EV-ready.

Although, in theory, the UK grid has the capacity to meet the predicted demands, increased EV uptake in certain regions - combined with a lack of investment in infrastructure - has the potential to create significant local challenges, including a greater likelihood of brownouts.

One such recommendation outlines the need for smart charging and appropriate EV electrical infrastructure. It has been decided (to limit impact on the grid) that most EV charging should be carried out slow and smart at home or work.

To address range anxiety - one of the main reasons fleet managers are dissuaded from making the transition to EVs – the NIA suggests that a network of rapid chargers across the UK should be implemented.

It is predicted that such a network would need to be in place by 2022 to meet the anticipated growing demand for EVs. The cost of delivering this network of approximately 240 rapid chargers has been quoted at around £10-million - a small price to pay for the removal of range anxiety.

The NIA also highlights the need for legislation for the integration of EV infrastructure. The Greater London Authority has already put its 20% active and 20% passive charging provision strategy into motion and this will likely have a positive knock-on effect for other local authorities in the near future, creating a domino effect as the UK’s largest smart city paves the way for the EV evolution similar to the impact that the Merton Rule on renewables initiated in 2003.

The demands required for smart charging do, however, need to be validated to ensure the new smart charging requirements - and the ensuing infrastructure - is not overestimating the actual demands.

If we as a nation are to limit pollution and usher in EVs and CAVs, we must prioritise and target the above key considerations as a matter of urgency so that we are able to support global and UK visions for EV and CAV smart cities and our country of the future.