This month the reality of the new WLTP regulations hit home in the new car market and the continued confusion in the fleet market remains a concern.

Despite a number of attempts by industry pundits and government representatives to clarify the position, the new legislation has impacted new car sales, new registrations and thrown barriers to choice in front of the company car user worried about what to order as their new car for fear of increased benefit in kind taxation.

August 2018 Society of Motor Manufacturers and Traders’ figures paint a positive image of the new car market although the reality is far from the rosy numbers published.

The fabulous 23% jump in new car registrations appears in the main to be a direct representation of the need to pre-register cars that would not pass the new regulations.

It is interesting to delve into the data in more detail to establish where the volumes have come from and the chart below highlights the top 10 manufacturers that have shown the largest increase in registration volume over the same period last year during the month of August 2018:- 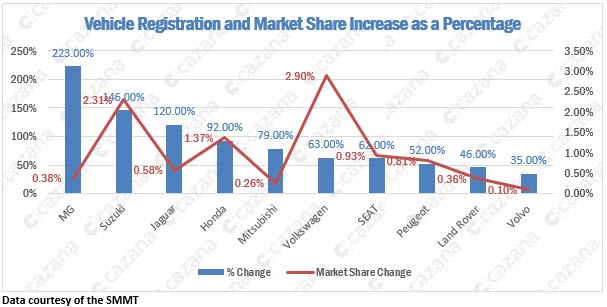 This table is based on manufacturers that register more than five hundred cars a month.

In terms of outright percentage increase, MG leads the way and for many, this will not be a surprise as MG seek to get more volumes of “older” new cars into the used car market.

The brand that has gained the largest market share improvement is Volkswagen and this may not surprise the industry either given the groups challenges with emissions over the last three years.

However, it is important to consider that in some cases these figures may well be driven by halo product that is finding genuine buyers in the new car market.

There are a number of key fleet players in this chart and this is essentially a rebalancing of the new car position forced by legislation from the UK government and is unlikely to be an issue in the remaining months of the year.

However, the lack of certain new cars from many manufacturers in the market over the coming months will be.

This stock shortage is because they have not been able to get vehicles tested in time or through the new testing regime for engine management reasons.

This is beginning to create a build-up of new car demand as company users hold on for the car they really want.

Those manufacturers who were unable to ensure testing of the myriad of option combinations on each range had been carried out in a timely manner may well lose business to competitors who were better at pre-planning.

In years to come it is likely that there will be a shortage of used cars due to the varied levels registered over the course of this six-month period which may see retail values rise while reflecting supply and demand.

More important is to consider what may happen to the used car market in the coming weeks and months.

Given that the volume of pre-registrations coming to the market will be the start point in any chain reaction the chart below shows the performance of sub twelve month old cars over the past year :- 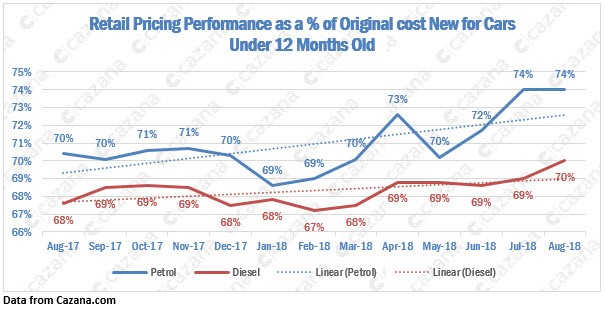 This chart is important as it highlights that there is an increase in retail pricing for sub 12-month-old vehicles.

The key here is in the detail and this chart could suggest two things.

Firstly, it could mean that values are increasing as there is strong retail demand.

However, secondly the increase in the percentage of original cost new could be because of the profile of used cars that are appearing in the market.

If there are more premium badge models in the data, then the retail percentage will increase as those vehicles tend to hold their value better.

This highlights the need to be able to accurately look at live retail insight on a daily basis to effectively interpret market activity as it happens.

In this instance, the uplift is likely to be because of an increase in premium badges being pre-registered.

Given that we are coming towards the end of an extended summer period it is appropriate to look at the performance of one of the few remaining seasonal market sectors.

The roadster and convertible market have evolved enormously over the past 10 years as the product has become more usable on a day-to-day basis.

Equally, the introduction of diesel power into what had hitherto too been considered a sector full of performance models for the wealthy has brought everyday convertibles to the fleet buyer and company car driver.

The next chart shows the performance of all convertibles and roadsters aged between two and 5 years old and the results are very interesting:- 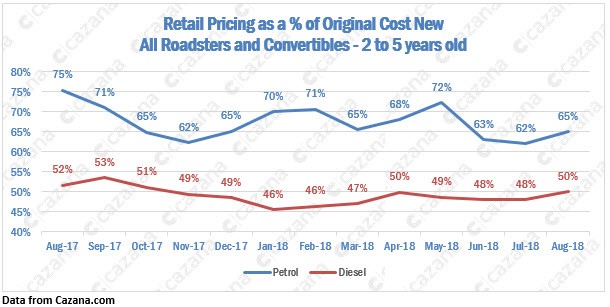 Looking at the data above it is evident that diesel powered roadsters and convertibles have been more stable in the UK market over the past year.

Retail pricing has operated within a seven-percentage point range and the shape of the curve is a good representation of the seasonal demand expected for this type of car.

However, the petrol models show a high level of volatility with a thirteen-percentage point range.

Of particular note is that the retail pricing does not match the peaks and troughs experienced by the diesel market.

Therefore, it is clear that care is still needed when seeking to defleet petrol roadsters and convertibles.

To summarise, the new car market has been through a unique period of rebalance in recent weeks that has yet to have any influence on the used car market.

There is widespread expectation that the used car market will see a period of pricing pressure as a result of the increased volume of sub 12-month cars in the market.

However, the Cazana live retail data does not look set to take a significant fall in value and given that there are less new cars available for sale due to slow WLTP testing there is a strong indication that the used car market will remain robust and values firm in the coming trimester.

Detail is the key and greater direction can be gained by looking at specific criteria as highlighted by insight shared in this monthly fleet focus.

April can be a fickle month for new and used cars sales with weather and holidays tending to divert the retail buyer accordingly.

WLTP could cause volatility in ex-fleet car market, warns Cazana

The market for ex-fleet cars could face volatility in the coming months as companies wait for the outcome of WLTP, warns Cazana.

The fear of a no-deal Brexit and WLTP has left the new fleet car market in a difficult and confusing place.