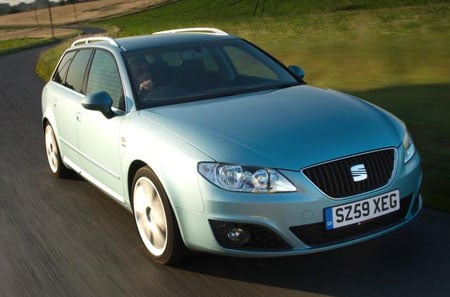 Since its launch in late-2009, Seat’s Exeo has been instrumental in increasing the manufacturer’s share of the new car sales market, which currently stands at a record 1.8%.

The saloon and estate enabled the Spanish manufacturer to offer an upper-medium model for the first time – critical for company car sales success.

It has proved to be a sound move, with the Exeo now Seat’s third best-selling model with 1,400 registrations so far this year according to the latest SMMT figures, behind Ibiza (more than 10,000) and Leon (more than 5,000).

Based on the previous generation Audi A4, the Exeo has stood the test of time well, with its exterior still looking fresh and distinctive two years after its launch.

The interior, too, remains a classy place to be, with its Audi origins obvious.

However, the Exeo’s roots are also the source of its weakest point – interior space.

Even in its prime, the previous generation A4 Avant was never the biggest estate car – more of a lifestyle statement than a serious load lugger.

And since its launch in 2005, cars have continued to grow in size - even the latest generation A4 Avant has expanded to offer 490 litres of space with the rear seats up, and 1,430 with the seats folded. This compares to the Exeo with 442 and 1,354 respectively.

The Exeo ST’s cabin space can’t compete with its class-leading rivals either, but if maximum space is not the critical issue then the Exeo has a lot to offer – especially in Tech trim.

This is on top of a generous standard specification which also includes sports seats and suspension, 18-inch alloy wheels and rear privacy glass.