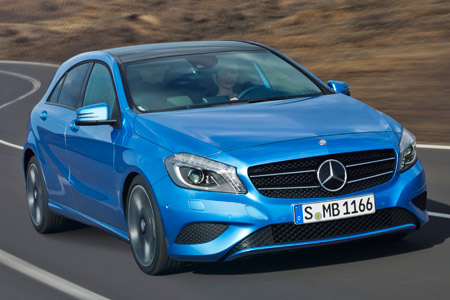 Mercedes-Benz has taken a radical step with its new A-Class, but in doing so has given it a far more conventional shape.

The previous A-Class was a kind of oddball premium-badged alternative to cars like the Vauxhall Meriva, while the new model has its sights focused on the high-volume lower-medium sector, and is an obvious alternative to the Audi A3 and BMW 1 Series.

It brings a range of new technology and safety features to the sector and, by the time it arrives in the UK, will give user-choosers the option of a fifth compact hatchback wearing a premium badge as it competes with Audi, BMW, Lexus and Volvo for sales.

Dr Dieter Zetsche, head of the board of management of Mercedes-Benz passenger cars, said: “The prospects for premium compact cars have never been better. The A-Class is more Mercedes than ever, yet unlike any compact Mercedes before.

“The segment is pretty crowded and we set out to build the Mercedes-Benz of small cars.”
Although this seems a bold claim, it does appear that there might be a strong appetite for a car like the new A-Class.

While styling is subjective, it is arguably one of the better-looking cars it its sector, managing to carry off its sporty styling in a more elegant way than the 1 Series or Lexus CT.

Of particular interest to fleet operators will be the manual version of the new A180 CDI SE, which has CO2 emissions of 98g/km, making it exempt from Vehicle Excise Duty, entitled to a full discount on the London congestion charge, and falling into the lowest BIK tax band for diesel company cars of 13%.

For those whom a sub-100g/km Mercedes-Benz is less important, the A-Class comes in Sport, AMG Sport and Engineered by AMG equipment grades (the latter currently petrol only, but a C220 CDI range-topping version will eventually be introduced).

The A-Class also comes with several new features as options, including hi-tech safety choices.
A pop-up bonnet helps reduce the risk of serious injury for any pedestrian unfortunate enough to be hit by the new A-Class, but there is also a collision mitigation system to help avoid crashes in traffic by alerting the driver if sensors detect he or she isn’t responding quickly enough to a potential collision.

There is also a system that monitors driver awareness and recommends taking a break if the driver shows signs of drowsiness or inattention. It is active above 50mph.

The A-Class also features new connectivity features, integrating the Apple iPhone including Siri compatibility. Drivers can access key content from their iPhones through the in-vehicle display using the control on the central armrest.

No A180 CDI variants were available on the launch, but we did try the A200 CDI, which is a rival for 150bhp 2.0 TDI versions of the new A3 (although for a true like-for-like comparison we need to wait for the A3 Sportback) and the 143bhp BMW 118d.

Mercedes-Benz is keen to emphasise the sporty nature of the new model which cuts the ties with its predecessor.

The driver sits quite low and the steering feels remarkably responsive.

The 136bhp engine in our auto-equipped test car was smooth and responsive, while the optional sports suspension rarely caused the car to feel unsettled, while noise intrusion was also low.
Interior materials are of the quality you’d expect in a modern Mercedes-Benz, and are very close to the class benchmark for fit and finish set by Audi.

The sports seats in our test car – standard on all SE and Sport models – also provided excellent long-distance comfort.

Boot capacity is a little below the class norm at 341 litres, but should easily cope with the carrying expectations of a car of this size.

Mercedes-Benz has already done well to create a more youthful image for the A-Class through its advertising campaign, and the fact that there is a new choice in the sector with established prestige should make it attractive to some drivers who want to make a change from the default premium badge choices.

That it should tick all the important boxes for fleet running costs makes the decision of the organisation paying for the car a little easier.