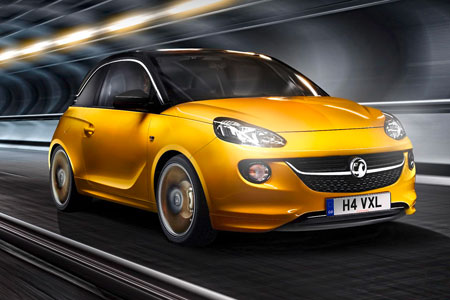 Only time will tell if General Motors is allowed access to the exclusive club of manufacturers who are attracting lucrative fresh sales opportunities with chic urban cars.

But Opel-Vauxhall officials are confident that the funky Adam city cars will open the door to growth across Europe and signal the start of an ambitious expansion plan involving a raft of new models.

Available from February, the trendy rival to the Fiat 500 and Mini is the US firm’s first car in the ‘fashion’ sector and is sufficiently different to be a success, believes Vauxhall product manager Ian Mitchell, who is predicting sales of 8,500 next year, followed by 10,500 registrations annually.

“Unlike our rivals, we’re not launching a retro product. Instead of imitating others, Adam is unique with technology, quality, equipment and new ideas. But it is also for people who want their cars to express their personalities,” he said.

On the road, the mid-range 1.4-litre engine needs to be worked hard to provide a lively personality but handling is neat from firm suspension that produces a ‘jiggly’ ride over some surfaces. Overall, comfort is good with minimal noise intrusion at speed, but despite being longer and wider than the Mini, space is limited for luggage and the rear seat is suitable only for small occupants.

Clock-shaped instruments and switches with chrome bezels complement sports seats, a leather-trimmed steering wheel and double stitching to promote an above average environment in our top-trim Slam test car, but the effect was blunted by a lack of damping on grab handles.

Surprisingly, start-stop is a £295 option but the extra £275 charged for a new on-board infotainment system will be seen by many as a bargain. It links smartphones to the car to put internet applications on a large fascia touch screen and is particularly impressive in sat-nav mode.

Other extras include automatic parking, blind spot alert and tyre pressure monitoring but the Slam is well equipped as standard, even if it does fall short of premium city transport.