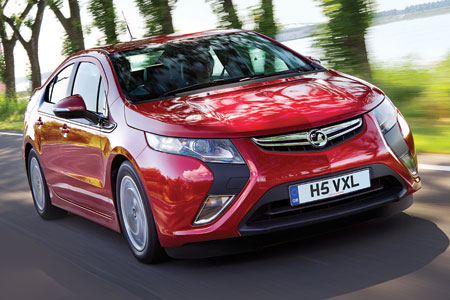 We first tried the Ampera just over a year ago and, although it was a prototype, we had the feeling that Vauxhall could be on the verge of something significant regarding alternative fuels.

Now we’ve tried pre-production cars and have a more realistic impression of how these cars will deal with day-to-day life after they arrive in the UK in April next year.

The Ampera is Vauxhall’s version of the Chevrolet Volt and, for now at least, uses a unique form of hybrid technology. It has a battery (fully charged from empty in about four hours) which drives an electric motor.

When the charge (of between 25 and 50 miles of range, depending on driving conditions) is depleted, a 1.4-litre petrol engine then keeps the battery charged while moving. This technology means the Ampera is always powered by its electric motor and for most journeys should be powered solely by the plug-in charge.

Vauxhall’s research suggests a plug-in charge should be sufficient for the typical daily journey for 80% of drivers, but so-called ‘range anxiety’ is then eliminated on the occasions where the driver needs to travel further than 50 miles. This wouldn’t necessarily be the case in a battery electric vehicle which has a range of up to 100 miles.

Although Ampera and Volt will arrive in the UK within weeks of each other, it’s almost guaranteed that Vauxhall’s superior muscle in both retail and fleet will see it take the lion’s share of sales, despite a £500 price premium.

The Ampera will have a transaction price of £28,995 after the Government’s £5,000 plug-in car subsidy is taken into account. It’s being pitched as an upper-medium car – and at that price it would be in the same bracket as top-end Ford Mondeos, Vauxhall Insignias and Volkswagen Passats.

It has sharp, slightly futuristic looks, and the ‘boomerang’ features at the front of the car below the headlamps are expected to become a feature of forthcoming Vauxhalls.

The Ampera is a four-seater as the battery cells take up space in the transmission tunnel, but for the most part it feels like an expensive car inside. There is climate control, satellite navigation, electric windows, steering wheel-mounted controls and some sophisticated displays.